After intending to compile and (self) publish a book of poems and prose pieces written between the ages of 16 and about 24, I have finally done so.  I hope that someone will enjoy a poem or two!

A central aspect of my job and life as a social entrepreneur, social crusader and poet is to inspire and empower others to follow their dreams and, in turn, better the world.  Indeed, one of my favorite sayings is that there is nothing more beautiful than a life well-lived.  Unfortunately, there are so many obstacles to living the lives we wish to lead: societal and parental pressure, the imperative to earn money to pay off student loans, a lack of supports and examples for those seeking to do bold things, and so on.

As a result, far too few people do what it is they truly want to do, and this has horrible consequences for the individual and for society as a whole.  After all, in the year 2013 we can no longer justify social or environmental injustice with the argument that we don’t have the capacity to solve them: we have all the technology, the money, the wealth, the examples and the business models needed to eradicate poverty, avoid climate change, and so on.  What’s lacking, then, is the will to do so. And as I often argue, there is a significant disconnect between our will and our desire–for how many of us want to see a better world?  I’d venture that the vast majority of us long for that.  So what’s the problem? Simply put, because we feel incapable of living up to our ideals we often pursue careers that, at best, are neutral and, at worst, negatively impact the world.

The Dark Knight and Me: an Essay 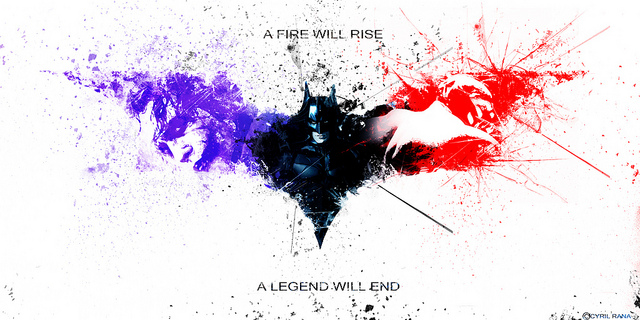 If you haven’t seen The Dark Knight, there are two things I want you to know: first, that it is an absolute masterpiece, and second, that it resonates very deeply with me.  Much of what I write will deal with why I identify so much with the movie, but let me take a moment to summarize the film.  Bruce Wayne, played by Christian Bale, is one of the wealthiest men in the world.  His parents, who built Wayne Enterprises, were intensely idealistic and spent their lives trying to improve Gotham City.  Unfortunately, they were murdered in front of Bruce when he was very young, and in the first film in the Batman trilogy (directed by Christopher Nolan), we see the young Bruce go on a spiritual journey.  That movie, titled Batman Begins, showed Bruce’s transformation from an angry and dejected young man, to his decision to become the Batman in order to continue his parent’s fight for justice.

In The Dark Knight, Batman’s attempts to do good are constantly foiled by The Joker, a sociopathic murderer played by Heath Ledger just before he died of a drug overdose; it is a haunting, brilliant, spine-tingling performance, perhaps the best I have ever seen in a movie.  The Joker puts the Batman into situation after situation where the line between Good and Evil is blurry; for instance, Ledger’s character informs Gotham that if Batman does not remove his mask and reveal himself to the world, five people will die.  The Batman does not want to reveal himself for reasons I will explore below, but he finally realizes, after people begin dying, that he cannot abide the suffering he is causing.

My masters thesis in Environmental Studies at Brown University looks at how microfinance–the provision of small loans and other financial services to people not considered credit worthy by traditional financial institutions–can be used to advance environmental sustainability as well as social equality and empowerment in the United States.  The thesis starts out by explaining the philosophical approach that I applied to problem, namely, that to create a green economy in the US we need to ensure that all segments of society are engaged on environmental issues through entrepreneurship, jobs, investment opportunities and a sense that environmental problems are relevant to people’s lives.  The rest of the thesis explores how microfinance can accomplish those goals through 1) supporting ‘green collar entrepreneurs’–low and moderate-income individuals who want to start or expand green micro and small businesses, 2) by providing environmental education to all borrowers so that they are empowered to become civic leaders advocating for policy changes, organizing community events, and starting businesses that improve environmental quality, and 3) by providing loans for residential energy-efficiency and renewable energy upgrades to homeowners that wouldn’t ordinarily be able to partake in these types of programs due to problems with credit history or other barriers.

A key component of my thesis was working to develop an organization, The Capital Good Fund, that can implement these aforementioned ideas.  In particular, we are working to develop “green credit builder loans,” which are loans of $100-$300 that finance the installation and purchase of low-flow showerheads, energy-efficient light bulbs and programmable thermostats.  The borrower receives education on how to use the product and realize additional savings; she also sees reduced energy bills AND she gets to build her credit history as well.  In addition, we are working to develop a larger loan product ($3,000-$10,000) that will cover 100% of the up-front cost of doing residential energy-efficiency projects.  What’s unique about the loan is that it is structured such that the payments are equal to or less than the savings, meaning that at a minimum the loan is revenue neutral to the borrower.  Lastly, we are working with our business borrowers to green their businesses and we are developing an environmental literacy curriculum that can be taught to our borrowers.

A Solution to the Limited Success of Micro-Credit in the United States?

Micro-credit has undoubtedly been a runaway success in developing countries as a tool of both poverty alleviation and economic development.  To date, some 100 million people have been reached by micro-loans, and Muhammad Yunus, the founder of the Grameen Bank in Bangladesh, won the Nobel Peace Prize for his work.  In addition, thousands of micro finance institutions (MFIs) have sprung up all over Africa, Asia and Latin America.

Micro-Credit’s Limited Success in the U.S.

Micro-credit has also made its way to the United States, a country that, despite being the world’s wealthiest, still has a poverty rate of over 13% (in 2006 over 39 million Americans were living in poverty.) In fact, one of the earliest U.S.-based micro-credit initiatives was begun in 1985 when Bill Clinton was governor of Arkansas and heard of Mr. Yunus’ work; however, the program, called the Good Faith fund, failed, because “the group lending model never caught on.” Since then, dozens of similar attempts have been made, and while many have been successful, the scale pales in comparison to that of Bangladesh and other developing countries.

Tonight, the Oneness of Things

It is late and my mind should be drifting through the colorful abyss of deep sleep, yet tonight sleep will not come. I am like a hungry flower who dreams of bees so ardently that all thoughts of pollen and nectar disappear; the world for which I long has crumbled into a fine mist of cool air and gentle breezes.

I wrote this article for the Huffington Post.  The article can be seen in its original context here

Last Thursday Al Gore gave a speech, the full text of which can be read here, that challenged America to “to commit to producing 100 percent of our electricity from renewable energy and truly clean carbon-free sources within 10 years.” It was a speech that should have inspired and excited Americans of all walks of life at least as much as, if not more than, President Kennedy’s famous speech calling on America to put a man on the moon within a decade. Instead, Mr. Gore’s idea has been met with a chorus of criticism, with the naysayers claiming that it would be too costly, too impractical, and too risky to attempt to meet such a goal.

The comparisons between America’s mission to the moon and Gore’s “moon shot” proposal, while useful, are flawed.  Both represent great challenges, yet it must be remembered that in 1961 we did not possess the technology to get to the moon; we do, however, have the technology to achieve 100% renewable energy.  But perhaps more importantly, although the Apollo program was great for national pride and beating the Soviet Union, it was by no means essential to our nation.  Switching to renewable energy, on the other hand, can not only dramatically reduce our greenhouse gas emissions, it can also help us regain our stature in the world, create jobs, rein in unpredictable energy costs, lower health care costs, get us off foreign oil (provided we also electrify our transportation system) and force American companies to innovate in ways that will be good for them and good for America.

Want to Save the World? & Be Happy and Have Fun Doing It!

The other day I was watching a program on the Science Channel about cutting-edge green technologies, such as solar towers (about which my good friend T.H. Culhane recently made a youtube video), rooftop wind turbines and high-efficiency, low-cost, thin-film solar panels, and I was struck by one thing above all else: saving the world is cool, fun and rewarding. Why wouldn’t one want to do it? Nowadays you can make enough money to live comfortably, while at the same time bringing technology, innovative financing, and social equity together to create the future. Why not get a job in the coming green economy? There’s no reason to be a hero; hell, since in the West we seem to have come to vie heroes as people that suffer for a cause, I don’t see how one could consider saving the world heroism!

Life As A Lucid Dream

I’m currently reading a book on physics titled ‘The Goldilocks Enigma: Why is the Universe Just Right for Life?’ by Paul Davies which, as with almost any book I read on science, philosophy or religion, has me thinking about the nature of existence, the universe and mortality.  In particular, a quote in the first chapter reminded me of a thought I’ve often had: that life is like a lucid dream, or a video game in which the parameters are limitless, and one is free to roam the world as one wishes.  Here is the quote:

“Somehow the universe has engineered, not just its own awareness, but also its own comprehension.  Mindless, blundering atoms have conspired to make not just life, not just mind, but understanding.  The evolving cosmos has spawned beings who are able not merely to watch the show, but to unravel the plot.  What is it that enables something as small and delicate and adapted to terrestrial life as the human brain to engage with the totality of the cosmos and the mathematical tune to which it dances?”

Quote of the Day

This is the quote of the day:  “If you want to make the world a better place, coming up with a breakthrough concept or technology is just the first step.  The most challenging problem is coming up with a practical way that you can put the innovation into the hands of the hundreds of millions of people in the world who need it.”–Paul Polak, Out Of Poverty