Large scale solar collectors such as this 100,000 square foot array are becoming Increasingly commonplace in the desert

In 1973, a collection of essays titled Small is Beautiful: Economics As if People Mattered, was published by the British economist E.F. Schumacher.  In it, Schumacher argued that our economies had become “too big and too centralized,” defined by dehumanization, mechanization and unsustainable growth.  Instead, Schumacher proposed what he called “Buddhist Economics,” which stressed the importance of decentralization for creating dignified, just and meaningful interactions between people and their work, environment, and the larger world.

I bring up Small in Beautiful because one of the most enticing features of renewable energy is its potential for realizing Schumacher’s vision of a global economy that functions at the level of the village. Because new forms of energy production-wind, solar, methane capture-are productive rather than extractive, and local rather than global, they can sustainably support economies that function on a human scale.  When combined with new methods of communication and collaboration (namely, information technology and the open source revolution), a new era can be ushered in, an era defined by the concept of a ‘Global Village:’ powered by the sun, globally interconnected yet culturally, politically and geographically unique.  A global village is self-sufficient (to the extent possible), empowers individuals, and is free from the hegemony of large corporations and institutions.

After all, as the cartoon below humorously points out, while oil companies can take control of oil wells, no one can claim to own the sun. 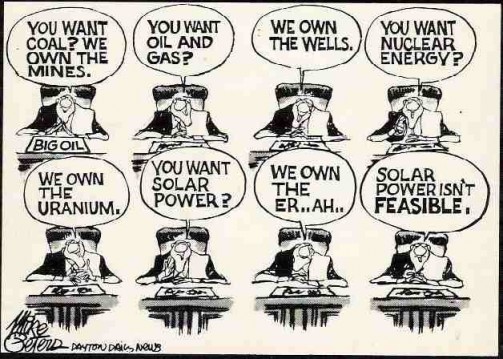 Philosophy Comes Up Against Economics

Unfortunately, while the philosophical implications of such a scenario are poetic, those pesky principles of economics keep rearing their ugly heads. As a recent NY Times article titled What’s So Bad About Big? points out, renewable energy, like anything else, benefits from economies of scale: producing more lowers the cost-per-unit.  Which begs the question:  Is bigger better for renewables?  If so, are we simply replacing massive coal-fired power plants with massive wind parks and solar concentrating farms? And what does this mean for the Global Village?

Renewable energy projects are becoming increasingly large.  For example, solar collectors, which are essentially mirrors that concentrate light on a liquid which, upon vaporizing, runs a generator that produces electricity, can easily take up between 100 and 350 acres of land and generate up to 64 megawatts of power.  And today’s wind turbines are enormous machines.  With 175 foot long blades spinning on top of 150 foot tall towers, they are able to produce 3.6 megawatts per turbine.  Additionally, other renewable sources of energy, such as tidal and biomass, can be large and large-scale.  As they try to meet renewable energy and emissions reduction targets, municipalities and entire countries are looking to rapidly scale up the implementation of large wind, wave, solar, geothermal and biomass projects.

For instance, Governor Donald Carcieri of Rhode Island just announced a plan to build two wave-energy plants in Rhode Island waters that would produce a total of around 20 megawatts, enough to power 18,000 homes.  The project will help Rhode Island meet its goal of “receiv[ing] 20 percent of its electricity from renewable sources by 2011.” Also, England is considering building 7,000 new off-shore wind turbines by 2020.  That would equate to 33 gigawatts of elecricity, enough to power all of Britain’s homes.  According to TreeHugger.com, the project “would result in a turbine being built for every half mile of coastline.”

Wind and Solar Won’t be Like Oil and Gas

Going big doesn’t mean that one company will own all the wind turbines or solar cell manufacturing plants in the world.  Nor does it mean that the Global Village can’t be realized.  It’s important to keep in mind that solar panels are essentially purified sand, and wind turbines are primarily made out of steel.  Designing, manufacturing, installing and maintaining renewable technologies creates jobs that can neither be outsourced nor monopolized.  Furthermore, the more megawatts of a type of energy are installed, the lower the cost, and the more likely it is that individual homeowners and small communities will be able to purchase that type of energy.  What’s more, coal, natural gas and nuclear power plants can never be adapted for residential use, while wind, solar, biomass and even low-impact hydro are ideal for distributed energy applications.

And while having a 250 foot tall wind turbine for every half mile of British coastline may sound like a lot, there are two key facts to remember.

1) The turbines are usually several miles offshore, and even at 250 feet, they are barely visible even on a clear day (and invisible on a typical cloudy day in England.

2) Coal and nuclear plants are dirty, dangerous, and unattractive, yet we put up with them because of the value we place on cheap energy.

Exploiting the Beauty of New Technologies

Now that wind energy is cost-competitive with coal, what excuse do we have for fighting a clean, secure source of power?  Sure, there are the concerns about wildlife, views and tourism.  But imagine a day where wind tourists travel to see wind parks.  Each turbine is uniquely painted.  Some have stairs that lead to a stunning view from the top of the tower.  Cities will offer dinner cruises that slowly meandering between the brightly lit turbines while guests dine, enjoy the view and listen to music.  Light shows can take place on the turbines on weekends. An industry is created around the clean energy that powers the city!

All this reminds me of a quote by the great futurist H.G. Wells who, in his book A Modern Utopia, said:

“There is nothing in machinery, there is nothing in embankments and railways and iron bridges and engineering devices to oblige them to be ugly. Ugliness is the measure of imperfection; a thing of human making is for the most part ugly in proportion to the poverty of its constructive thought, to the failure of its producer fully to grasp the purpose of its being. Everything to which men continue to give thought and attention, which they make and remake in the same direction, and with a continuing desire to do as well as they can, grows beautiful inevitably.”

1. the current trend toward larger, “centralized” renewable power plants, is not in any way analogous to the 20th century trend towards centralized Fossil fuel plants.  Renewable energy is, by definition, dependent on local flows on energy.

2. These large renewable projects are not threats no small-scale implementation; rather, they can help raise awareness and lower the cost barrier, making renewable energy more affordable for more people.

3. It is not possible to own the sun.  We are moving away from hegemony and towards a more just, equitable and empowering global economy, one that values the uniqueness of place, culture and the individual, and allows all three to flourish thanks to clean energy and the information technology it powers.