Worried Wind Will Spoil the View? Float The Turbine Out to Sea! 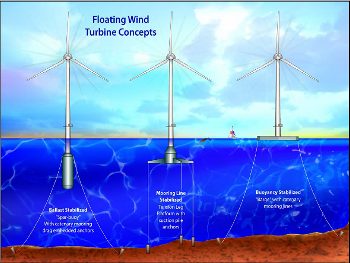 There are several ways to deal with the opposition to off shore wind farms: litigation; legislation; proving economic benefits; or siting them only where opposition in minimal. So far, none of those methods have led to a single off-shore turbine being built in the United States. A combination of NIMBYism, red tape, and powerful lobbies have held up proposed wind farms off Cape Cod as well as the Rhode Island coast and elsewhere.  While I am frustrated that the world’s fastest growing source of energy isn’t being installed at breakneck speed in the U.S., I believe it is well worth the effort to continue pushing for more wind energy, offshore or otherwise.  However, alternatives do exist that bypass many of the problems associated with current wind projects.

An MIT researcher by the name of Paul D. Sclavounos has come up with a way of floating wind turbines on platforms far away enough from the coast to be invisible from land.  Ordinarily, an offshore turbine “stands on towers driven deep into the ocean floor.  But that arrangement only works in water depths of about 15 meters or less.” Unfortunately, those kind of depths are usually “close enough to shore to arouse strong public opposition.”

The design by Professor Sclavounos allows the turbines to be sited hundreds of miles off shore, thereby greatly increasing the amount of potential project locations, and rendering moot any opposition due to concerns about views and property values.  It’s hard to underestimate what a breakthrough this is.  There are only so many sites that have a good wind resource AND are blessed with shallow water; but the amount of open ocean with strong winds is tremendous.  The only cost limitation is that of running a conductive cable from the turbine to the shore.  In other words, if this technology proves physically and economically viable, we may be looking at an absolute gold mine of consistent, politically palatable and environmentally/economically beneficial, renewable energy.

Here’s a description of how the design works:

Their design calls for a tension leg platform (TLP), a system in which long steel cables, or “tethers,” connect the corners of the platform to a concrete-block or other mooring system on the ocean floor. The platform and turbine are thus supported not by an expensive tower but by buoyancy. “And you don’t pay anything to be buoyant,” said Sclavounos.

An Answer for Offshore Wind?

Invenergy to Pay Landowners in Sight of Turbines

Wind Energy Could Power All of Britain’s Homes By 2020