I Finally Complete a Bike Race!! 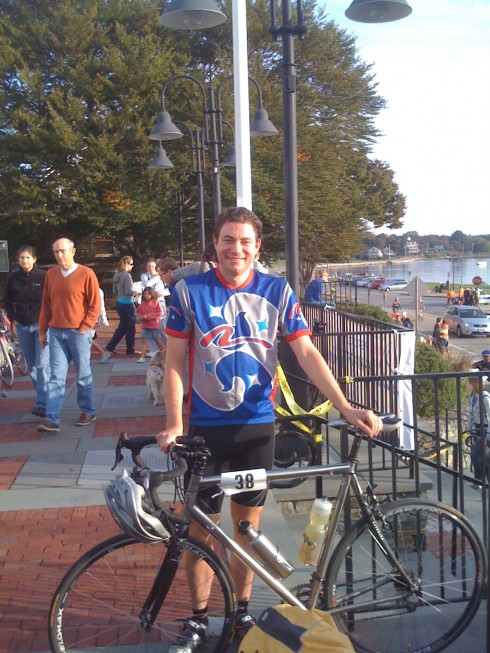 I have had a bad run of luck at bike races.  After longing for years to try my hand at racing, my fist two events last year were, well, unsatisfactory.  My first race, back in August of ‘07, didn’t go well for the simple reason that I was grossly out of shape and overweight.  I gave up 10 miles into the race, as I was unable even to keep up with people riding 1970’s steel bikes and jeans!  The great thing about that race, however, was that it inspired me to get back on the bike and start training again.  I immediately signed up for the last road race of the year in New England, the Jamestown Road Race, and began training hard.  On October 13th, I entered the event 10 pounds lighter and fairly confident that I could keep up.  Unfortunately, that race ended in disaster as well, as I crashed just 8 miles in.

This year I was determined to, at the very least, finish the damn race!

I’ve been training hard and consistently since June, and I now weight 20 pounds less than I did way back when I did that first race over a year ago.  I feel fit, strong and confident.  Nevertheless, I was very nervous about the race, because I really didn’t want to a)crash and b)get dropped.  The race course itself covers 20 miles of rolling terrain on a beautiful island.  Fortunately, the weather today, unlike last year, was absolutely beautiful: sunny skies, 70 degrees and no humidity.

Mike was kind enough to drive me to the race (I’m really glad he came along–it was a lot of fun!), and we got there at around 7:30.  That left me enough time to check in, get suited up, do a quick warmup spin, and line up for the 8:30 start time.  As the race got underway I felt strong, but very tense.  I quickly moved to the back of the peloton, not because I couldn’t stay at the front, but rather because I didn’t want to crash.  Instead of trying to ride right behind the people in front of me, I allowed a safe gap to form between myself and the other riders, as my primary goal was to stay upright and finally finish a race.

About 8 miles into the race I saw Mike, who decided to go for a run while I was on the road.  The pace didn’t feel too hard, but every time we went up one of the rollers I could feel myself get nervous, and it suddenly occurred to me that I wasn’t nervous about crashing: I was nervous about not meeting my expectations for how I should perform!  That calmed me down a little, but the big challenge for me was to stay calm and not try to accelerate every time I thought I was going to get dropped.  As the race developed, I settled into a nice routine, and I felt comfortable enough to start creeping forward as the pace picked up.

WIth roughly 5 miles to go to the finish, we were all still in a big pack, riding along the gorgeous course, and I could definitely feel people getting antsy and the pace starting to increase.  Suddenly, I saw a guy go down right in front of me, and I barely had enough to swerve to the left–into the other lane–to avoid the crash.  The guy’s leg hit my wheel as he went down, but I managed to stay upright–only to look up and realize that i was in the other lane going straight into a group of 50 racers in another category!  Luckily I got back into our lane in time to avoid any crashes.

At this point, I could tell it was crunch time.  Swerving around the guy that crashed forced me to sprint to catch up with the now accelerating bunch, but I caught back up soon enough.  At the three mile to go point I felt strong enough to move up the side of the ride into 6th position.  I was getting ready to launch an attack–I really wanted to try it–when we went around a sharp right turn and then immediately up a steep slope. Before I knew it, people were moving by me left and right, and I just couldn’t match the pace.  At the top of the short incline we made a sharp left and then descended to the finish.

I don’t know yet what place I finished–the results will be posted in the coming days–but I was at the back of the first group to finish.  I hit the line at 36 MPH, and over the 19.2 mile course I averaged 22.8 MPH.  More so than anything, I was happy to have finished a race, and excited to know that I can hang with strong riders.  The key is to build my ability to put out power in sprints, because I can obviously keep up a high pace for a reasonable period of time, but I appear to be unable to put out enough power in the sprint to the finish to keep up with strong racers.

This inspires me to keep up my training and get really fit over the winter so that when the collegiate cycling season starts in March, I can do well and help the Brown Cycling Team win! 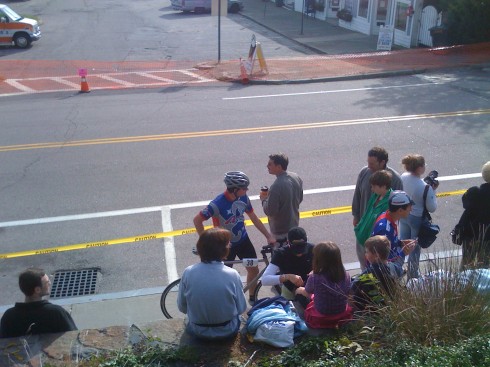 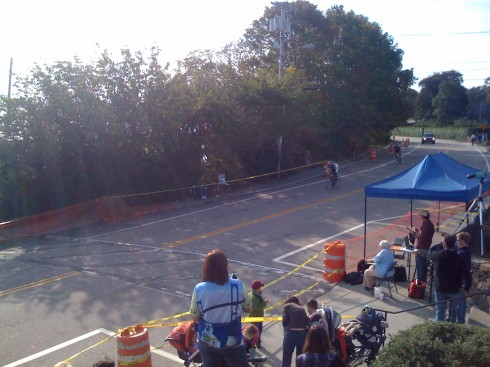 See All My Other Cycling Related Posts Here