Coal is Dead: Coal Ash Spill Yet Another Reason to Switch to Renewable Energy 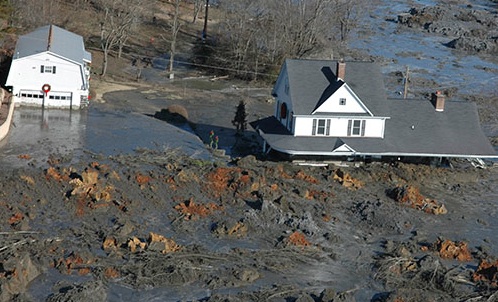 Coal Is An Awful Energy Source

For all the efforts of the coal industry to make it seem like it’s possible for there to be such a thing as “clean coal” (Al Gore’s Alliance for Climate Protection has been running some great ads dispelling that myth), yesterday’s disaster in Tennessee has demonstrated yet another way in which coal is a nasty, dirty, awful source of energy. What happened was the following, as described by the New York Times: a “breach occurred when an earthen dike, the only thing separating millions of cubic yards of ash from the river, gave way, releasing a glossy sea of muck, four to six feet thick, dotted with icebergs of ash across the landscape.” The ash is actually fly ash, “a byproduct of the burning of coal to produce electricity” that “contain[s] significant amounts of carcinogens and retains the heavy metal present in coal in far higher concentrations.” This isn’t the first time such a breach has occurred, though it is probably the worst, having destroyed 15 homes and released 2.6 million cubic yards of toxic heavy metals.  So add toxic sludge to air pollution, climate change, danger to miners, and mountaintop removal to the dangers posed by coal mining and the burning of coal to generate electricity.  Isn’t that enough to convince America to switch to renewable energy?

This is an epic disaster, and I believe it signals the end of coal and other fossil fuels.  For one thing, the cost of cleaning this up is going to be tremendous, and the environmental and social impacts are going to be significant.  But more importantly, the costs of renewable energy sources are coming down rapidly, and a simple policy shift removing subsidies for fossil fuels and applying them to renewables would make clean energy synonymous with cheap energy.  If Obama is to be a great President, he’ll have to resist the coal lobby and speak frankly to the American people about the danger of fossil fuels and the beauty of renewables.

Yet Another Reason to Switch to Renewable Energy

When Al Gore called on America to generate 100% of electricity from renewable sources within a decade, I was absolutely thrilled: I thought such a challenge would inspire an entirely new generation of innovators to step up and answer the call.  Hearing the news about this coal accident, I am even more convinced about the wisdom of his challenge.  After all, coal is the energy source that once made the air of London unlivable (and inspired many of William Blake’s poems), and now makes the air in cities in China and around the world unbearable.  What’s more, the burning of coal is now one of the world’s leading contributors to global climate change.  Why do we not find it reprehensible that every year miners around the world risk their lives in coal mines to feed the beasts of coal fired power plants, when they could working above ground installing wind turbines, solar panels, biofuel plants and geothermal stations?  Why do we accept the mercury released into the air by coal plants?  Why not dig into the minds and hearts of America’s citizens for new energy ideas, rather than blow up mountaintops to use a 19th century fuel source to meet 21st century energy needs?

The job creation potential of the renewable energy economy is huge, but the benefits don’t end there.  Think of all the money taxpayers spend cleaning up the pollution from coal mining and production.  Think of the adverse health impacts of all that air pollution.  And finally think of the danger climate change poses for the future of our planet.  What argument is there for coal?  Cost?  Sure, coal is cheap, primarily because the taxpayers subsidize coal production. Remove the subsidies and apply them to renewables, and everyone will be better off.  Unfortunately, the coal lobby has its head so burried in the sand that they are able to claim you can have clean coal.  Well suppose you could safely capture and store al the carbon dioxide from burning coal, that still wouldn’t solve the mining and storage of waste issues.

No, the creation of an equitable and healthy 21st century hinges on a push for 21st century energy sources, which will invariably come from the sun.  Wake up America, and stop fouling your land and your people due to a stubborn refusal to face the facts.  Coal is dead.  Good riddance.

Considering All the Benefits of Renewable Energy is Critical

Fossil Fuels Are the Bottled Water of Energy

Residential Wind Barriers on the Rise, Some Barriers Remain

How Renewable Energy Can Resolve the Iranian Nuclear Issue