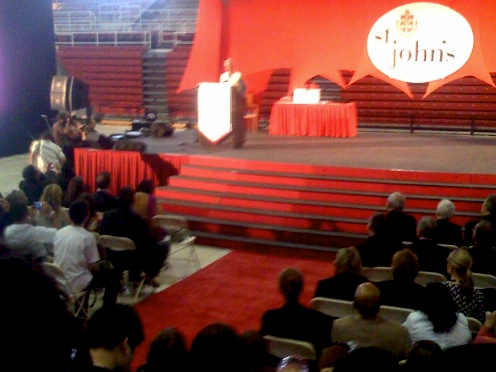 This unfortunately grainy photo was taken while Dr. Yunus spoke about microfinance on Saturday, April 18, 2009

Ever since I read about Muhammad Yunus and the Grameen Bank in 2007 I have been absolutely enthralled with the concept of empowering people to help themselves through access affordable, small loans.  After all, my masters thesis deals with green microfinance, and during my time at Brown I have co-founded The Capital Good Fund, a non-profit microfinance institution.  So when I heard that Dr. Yunus would be speaking at St. John’s University in Queens, New York, I knew that I could not pass up the opportunity to go.

I went with two other Capital Good Fund staff members, Nabeel and Faiz.  We met at 8:30 in the morning at Kennedy Plaza in downtown Providence, Rhode Island, and caught a bus to New York City. From there, we took the subway and a bus to get to St. John’s.  Outside of their basketball stadium, a market had been set up where Grameen America’s borrowers were selling their wares–food, purses, jewelry, etc.  Grameen America was founded in 2008 by Muhammad Yunus, and is being run by senior executives of Grameen Bank.  In their first year of operation, they made 650 loans totalling $1.5 million dollars, with a repayment rate of over 99%.

Yunus has become my hero, and to see him in person was a truly moving experience.  He comes across as extraordinarily regal, patient, humble and passionate, all impressive traits considering he is a nobel laureate who has revolutionized the way the world thinks about finance and whose stated goal is to relegate poverty to museums.  The event began with presentations by Grameen America staff, as well as several of Grameen’s borrowers, who sang songs and gave mini-speeches.  Then, after several other speakers, Dr. Yunus himself stepped onto the stage and told the story of how Grameen was founded and why the work of Grameen America is so important.

I want to take a moment to talk about what the vision and work of Grameen and Dr. Yunus mean for The Capital Good Fund (CGF).  As we spent countless hours dealing with all the tedious details of creating and running an organization, It can be easy to forget WHY we are doing all this work.  The answer is simple: we are working to help realize the vision of a world without poverty, a world in which economic development and environmental stewardship go hand in hand, and a world in which the dreams of any entrepreneur can be realized.  It takes time to achieve these goals, yet it must be remembered that over the last 30 years Grameen Bank has reached over 7 million of the poorest women of Bangladesh (roughly 7% of the entire country!) and launched a revolution that now reaches over 100 million over the world’s poorest families.  At one point someone asked Yunus where he would like to see Grameen America in 3 years, and he answered “I would like to see us reach 50,000 people.  Why not?  The need is there.” That is the kind of passionate, optimistic thinking that enables Grameen to be so successful, and it is the kind of spirit that we must bring to CGF.

It would be easy for CGF to remain a tiny organization that serves a handful of individuals every year.  But there are 40 million US households that are underbanked or unbanked.  The US has a poverty rate of 13%, concentrated among blacks and latinos.  50 million Americans have no credit score, locking them out of the power of the American financial system. In short, there is a massive, unmet need for the services that CGF provides.  In order to achieve our mission we must, and we will, grow, expand, innovate and share what we learn until the land of prosperity ensures prosperity for all.  It will not be easy to do all this: we will have to raise a lot of money, we will have to streamline our operations, invent and refine our products and service, etc.  But that is easy compared with the challenge of living in poverty.  We are uniquely positioned to take advantage of our skills, resources and energy to be leaders.  We must aim to make CGF the best microfinance institution in the country, and to become a model for countless others.

If all this sounds overzealous, let’s never forget that Yunus started with $26 in loans to 42 Bangladeshi women.  From there, he has created an organization that has lent out over $6 billion with an average loan size of around $200.  That is absolutely astounding, but when you hear Yunus speak, it had much more to do with listening to the needs of people and working hard to meet those needs than it did with an other-worldly injection of inspiration and genius.  In other words, anyone can do what Grameen has done–it is merely a question of time, of patience, of passion and of a willingness to pursue a vision grand enough to solve the problem you are seeking the address.

Now its time to get out there and make it happen.