First Experiences With Bangladesh and Grameen 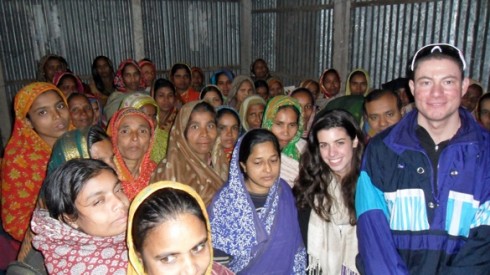 This photo shows one of the Grameen center meetings

When Jill and I landed in Dhaka on Sunday the city was shrouded in an intense fog that, we later learned, is quite common this time of year.  The scene when we walked outside the airport was pretty much what one would expect of a third world capital city: people everywhere; rickshaws competing for space with taxis and buses and all manner of other vehicles, human, animal and fossil-fuel powered; bustling markets; polluted air, etc.

We were taken to the Grand Prince Hotel and then immediately met up with our interpreter, Matin, who accompanied us to Grameen Bank’s head office.  Our first adventure took place when Muhaimeen hailed a bicycle rickshaw that, in just three chaotic minutes, brought us to the office.  Amazingly, Grameen, a Bank that exists for and is owned by the poor, has a 21 story head office, one of the tallest buildings in the area.  One can’t help but feel that Grameen is a kind of conglomerate for good: leveraging all the ingenuity, efficiency, scale and power of corporations while being driven entirely by the motive to eradicate the world of poverty, of pollution, of injustice.  The numbers are staggering: Grameen has 8 million borrowers, 97% of whom are women and all of whom are poor.  They have 20,000 employees, a staggeringly high repayment rate, 4 million bank accounts for non Grameen borrowers (all borrowers must open an account so that they can deposit their required weekly savings there), and have turned a profit all but three years of operation.  Lastly, they are 95% owned by the borrowers themselves–each borrower gets a share in the company–and 5% owned by the Bangladesh government.  In short, Grameen’s Nobel Peace Prize was well deserved.


Plans for the Coming Weeks

On the 11th floor of the building we met with our coordinator from Grameen’s International Program: Harun.  Harun sat down with us to provide an overview of Grameen’s history, philosophy, methodology and products and services, as well as an explanation of how the Basic Training program works.  Like everything with Grameen, the Basic Training program is extremely well organization and thought out: yesterday we had an orientation visit to a village (Grameen means village in Bangla) and today we leave with our interpreter to spent 12 days at another village where we will be intensely trained in the Grameen approach.  After that we will come back to Dhaka to debrief with Harun, ask additional questions, etc., and finally we will spend the remaining week visiting some of Grameen’s ‘sister organizations:’ these are organizations, some for profit and some non profit, all designed to meet a need of the poor.  Examples include an eye care hospital, a telecom company (the largest in Bangladesh) and a renewable energy non profit.  Lastly, we will meet with some key Grameen people, including–hopefully–the Managing Director, Dr. Muhammad Yunus!  What follows are photos and thoughts from our first trip to the village.

Jill and Andy in a mustard field

We visited a village that is about 2 hours from Dhaka and went to a Grameen Branch office.  There, we had tea and conversed with the Branch Manager as well as the Zonal Manager.  Then came the highlight of the trip: we got to attend a Center Meeting (more on this in coming posts, but basically to get a loan the women form a group, and then 6-8 groups form a Center) where borrowers make repayments and discuss various issues relative to their businesses, health, education, and so on.  The Center Meeting took place inside a non-descript building made of corrugated iron; inside, 60 sari-clad, shy-yet-smiling women sat waiting to make their loan repayments.  Harun introduced us to them and lead a kind of question and answer session.  Some of the women told us about what they do with the loans–many of them had been with Grameen for 15 years or more–the impact of the loans, and much more.  They were so excited to meet us; at the end of the meeting they practically begged us to see their homes!

Sitting in that room, surrounded by women who were previously poor and subservient to men but who have moved out of poverty and are now full of confidence, I felt so much optimism about the future of the world.  Yes, there are staggering problems in the world, but the simple beauty of Grameen is that it empowers the people who are struggling to help themselves; they do not need to wait for government aid, or for a law to be pass, rather, they are able to take charge of their lives and their destinies.  They vast majority take full advantage.

Grameen has expanded from offering micro business loans to also loans for education and the construction of homes.  It is simple amazing to hear how Grameen has literally changed the villages of Bangladesh over the last thirty years.  They like to say that they do not have 8 million individual borrowers but rather 8 million families that they engage with!  Think about that.  Grameen has managed to slowly begin to change the way in which women are treated and viewed in society (Bangladesh currently has a female prime minister).  Grameen has brought millions out of poverty, helped built hundreds of thousands of safe, sanitary homes and enabled tens of thousands of the children of Grameen borrowers to attend college and even earned advanced degrees.

Over the next 12 days Jill and I are going to learn all the nuances of how Grameen works so that we can replicate this success in America.  For now, I am absolutely amazed by what I am seeing.  The people couldn’t be nicer and more hospital and Grameen couldn’t be more inspiring.  Stay tuned for more thoughts, photos, ideas and musings! 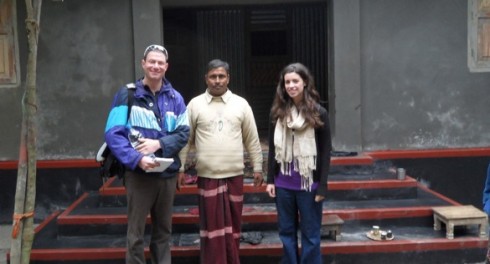 Jill and Andy outside of a borrower’s home