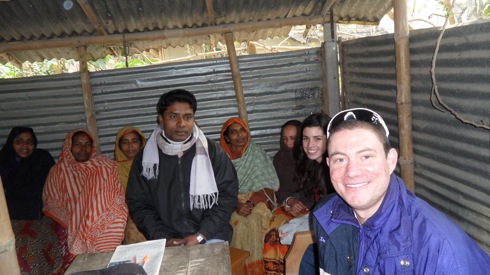 Andy and Jill with a Grameen Bank Center Manager and Borrowers

If you talk to anyone at Grameen Bank they will tell you that the real bank can only be found by going to the villages where Grameen operates.  Grameen, after all, means rural, and in fact by law Grameen can only operate its lending programs in the villages.  It is for this reason that on our third day in Bangladesh we–Jill, me, an Australian named Mark, our translator Matin and Mark’s translator Yunus–are all crammed into a mini-van barreling down the roads that lead to Rashahi, the zone that we will be visiting. Traffic here is an eclectic mix of motorcycles, bicycle rickshaws, cars, trucks hauling absurdly large loads and comically unstable buses all chaotically weaving and swerving, honking and narrowly avoiding catastrophe.

After 6 hours of bouncing along these roads we are happy, if not relieved, to have arrived at the Branch that will be our home for the next 10 days.  It is a two-story building–the first occupied by Grameen–with two small rooms for guests.  In order to understand where branches fit into the Grameen hierarchy, I need to take a moment to explain how the bank is organized.  For in truth, Grameen is nothing short of an organizational miracle.  In fact, I would go so far as to say that while Dr. Muhammad Yunus is praised for recognizing that the poor can be credit worthy, his real, lasting achievement is in the details of how he goes about delivering that credit to them in a cost-effective manner.

The most fundamental unit of Grameen is the group.  Groups consist of at least 5 and up to 10 borrowers (97% of whom are women).  Groups come together to form a Center; the standard number is for there to be 60 borrowers in a Center consisting of 12 groups of 5.  In many ways the Center is the heart of Grameen; this is where the borrowers gather once a week to make payments on their loan, deposit their savings, make loan proposals and discuss various issues with fellow borrowers.  What’s more, the Center Meetings, which take place in Center Houses–made of bamboo and with tin roofs–also serve as “female empowerment zones.” It’s hard to describe how interesting it is to see, in a male-dominated society such as is found Bangladesh, 60 women gathered together, in public.  It truly stands conventional notions of women staying out of public life on their head and, of the last 30 years, these centers have actual begun to change manner in which women are perceived and treated.  That’s so small accomplishment for an organization that “just gives out small loans.” 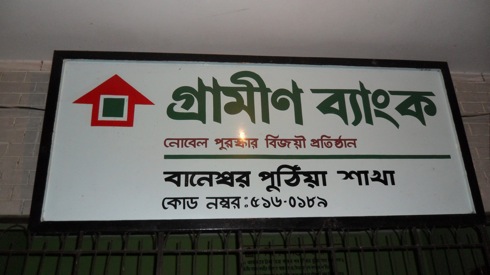 The sign on top of the Branch where we stayed: the Grameen logo can be seen on the left

The borrower-group-center structure of Grameen is what allows it to be profitable despite the extremely high transaction cost/low profit margin nature of microlending.  Consider this, for example: center managers (Grameen’s equivalent of a loan officer), each visit two centers per day, 5 days per week.  Given that centers typically have 60 borrowers, that means that one loan officer oversees 600 borrowers!  This is possible because so much of the customer service that is done by a paid employee in a Western bank is done by other borrowers in the Grameen model–underwriting, support, encouragement, recruitment, etc.  As a result, a Branch–which is the next level up in the hierarchy–can have up to 10 Center Managers, overseeing 6,000 borrowers.  Given that at any given time upwards of 90% of these borrowers have outstanding loans, and that the repayment rates are usually above 98%, it isn’t hard to understand how it is that Branches can be profitable. For example, the Branch we are visiting has 4,700 borrowers, of which 4,500 are active, a 100% repayment rate and is highly profitable.

In the next post I’ll discuss how the Branch operates, conclude my explanation of the Garmeen organizational structure, and tell stories of some of the borrowers. 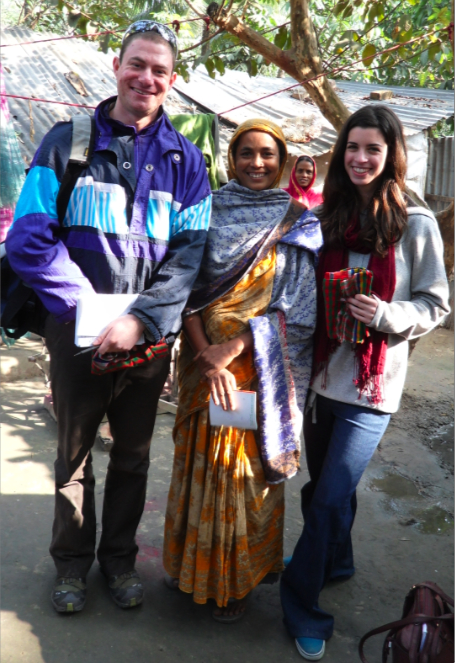 Andy and Jill with a Grameen Bank Borrower