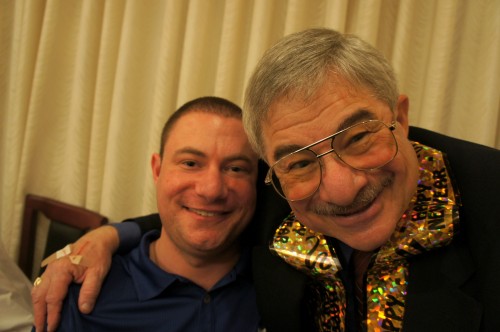 My Dad And I

This is a story about one man, my father, and his brave battle with a puffy prostate.  It is a tale of many things—woe, pain, hope, despair and perseverance—but alas, in the end it is not one of victory.  It all begins when Dad, who goes by Dick (no pun intended or needed), sees a urologist in the mid 90s.  At the time, Bill Clinton is President, going through his own penis-related travails, albeit on the opposite end of the genital experience spectrum: for a blowjob is as far away from a puffy prostate as you can get without departing the nether regions entirely.

One can imagine my Dad, with his pants around his ankles, and the Doctor, in his crisp white frock, discussing the diagnosis.  “Will this make my sex life better?” my Dad asks. “Only if you enjoy having a surgical instrument inserted up your urethra, followed by pieces of prostate tissue being trimmed away,” replies the erudite Doctor.  Dad, scared stiff, decides to postpone his Trans Urethra Resection Procedure, or TURP, for as long as possible.

Fast-forward 10 years.  Dad is on a plane back to Los Angeles from a 50th high school reunion—one of those special times when adults complete their transition from comparing “boobies” and “peepees” in the playground to boasting of the features of their leather-laden vehicles and the locations of their second homes.  The captain has turned off the fasten seatbelt sign and he is free to move about the cabin; the bathroom beckons.  As he pulls out his member and steadies himself against the turbulence, he finds that, of the two functions biology has given the penis, one, already in long decline, is being joined by the other, whose disability is making itself painfully clear. He ambles back to his seat, trying to view the bladder as half full, to ignore that it is actually half empty, and soon finds himself back at the urologist.  It is time for TURP!

A week before the big day, he gets The Call: a Green Light Laser, which is far less invasive and painful, will be used in lieu of TURP.  Armed with this news, he arrives for the appointment with what might described as a bounce in his step: visions of free flowing streams fill his dreams to the brim.

And then it all starts to go to pot.  Minutes before Go Time, Dad learns that he will be awakening from the procedure with a catheter, the removal of which will have to wait for nearly another week.  Sure enough, as he comes to, he discovers a small, urine-filled bag tied to his thigh (for smooth and inconspicuous moving!) and a larger bag for the night.  His plans for the weekend are clogged.  He emerges from the doctor’s office with hopes for relief whizzing by, hopes he doubts he’ll ever get up, his face flush with failure.  The weekend drips away until, finally, the catheter can be removed.

Dad is ushered into a waiting room by a Philippine nurse and instructed to remove his shoes, pants and underwear.  Soon she returns and places a towel over his cock and balls.  Confused, he inquiries as to the reason for the towel. “For modesty, Sir,” comes the reply. A casual observer might note the utter lack of modesty inherent in being naked and prostrate upon a table, a catheter peeking out from your manhood and a female nurse ready to yank it out.  Nevertheless, the towel is removed and the balloon that holds the catheter within the bladder is deflated. A small hand grasps his shaft (the size of which will, also for the sake of modesty, be left out of this story) while another begins to tug on the plastic tube: a moment of pain ensues, followed by an unexpected pause.  “Excuse me nurse, but the catheter appears to still be in place.” With a look of consternation, the nurse replies, “It appears that it is stuck.” “Stuck?  What do you mean STUCK?” comes the anguished retort.

Now the Philippine nurse comes back with another, older nurse, and the two of them begin to play a sadistic game of Tug of War.  Fingers fondle the shaft in fruitless search of the source of the problem. Visions of becoming a Eunuch pass through Dad’s mind.  Frustrated, the two nurses leave and return with an imposingly burley woman.  Her approach is less gentle: with one furious yank, out comes the catheter, a scream of pain and a not inconsiderable outpouring of blood!

A week later, Dad calls the doctor and complains of painful urinations, only to be informed that this is “normal,” perhaps nothing more than a Freudian neurosis vis-à-vis the phallus.  5 days later, though, he is forced to rush his normal penis to the emergency room with an infection, the pain a blissful reminder of how glad he is to have no recollection of his own briss.  After 8 hours in the ER, genitals throbbing in a way that is diametrically opposed to their intention, he leaves with a shot and a new catheter.

The next day, while working at home, Dad feels something slide out; looking down, he sees that the catheter has fallen out.  Being the engineer that he is, he examines the device and quickly discovers that a defective retention balloon has burst and then deflated.  Weeks later, after the worst is over and a modicum of functionality has returned to his prodigal pipes, Dad continues to feel deflated, as though his youth has slid down into old age and the equipment bequeathed to him by evolution has reached the penultimate stage on the way to ultimate, eternal disrepair.