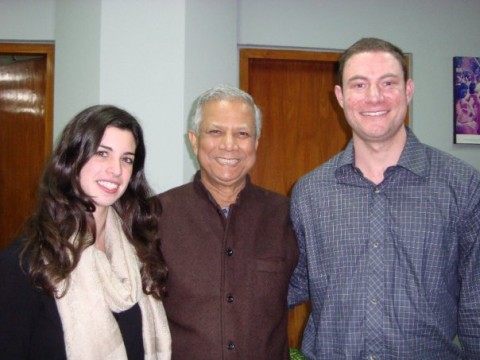 A photo of myself and my traveling companion with Dr. Muhammad Yunus

Dhaka is the capital of Bangladesh, a city typical of a ‘developing world’ megalopolis: a chaotic amalgamation of pollution, noise, people, animals, poverty, wealth.  But there is one difference: in this city, the skyscrapers belong neither to multinational corporations nor to government opulence.  No, in Dhaka the largest buildings are owned by Asa, BRAC and Grameen Bank—some of the largest and most innovative social enterprises in the world.

I am here to learn from Grameen, a bank unlike any other in the world.  Owned by the poor and built to unleash their own potential to move out of poverty, Grameen shouldn’t work.  But it does.  The village in which I am staying is 30 miles from the border with India.  When I awake in the morning an old lady brings a steaming hot bucket of water with which I shower; I find it to be an invigorating way of starting the day.  Breakfast consists of delicious, homemade food whose provenance I can see out the window.  My interpreter and I follow a loan officer as she travels by bicycle rickshaw or rickety motorcycle to group borrower meetings; the borrowers, all women, sit beneath a bamboo structure in the center of the village.  In an orderly fashion, with the precision of a Swiss clock or a well-drilled military, the women make their cash payments.

When Grameen first starting making loans in the 70s, Bangladesh was a country that practiced Purdah: women neither left their homes unattended by men nor did they control the money.  Thirty years later, sixty Bangladeshi women are meeting in the center of a village—accompanied by men, managing the family’s money and running, or helping to run, the family business.  Grameen has changed the social fabric of an entire nation; it shouldn’t work, but it does.  Had I, on the day of the Bank’s founding, presented what currently exists and laid out a vision for how to get there, every businessman, politician, activist would have laughed me out of the room: they would have known that this wouldn’t work.  I pause and think of the fact that Jesus was a carpenter, Gandhi was a lawyer and the best and brightest bankers, statisticians, mathematicians and lawyers, precipitated the Great Recession of 2008.  So much for the connection between what we know is possible and what is actually possible, between expertise and success.

As of this morning my goal in life is to become a professional tennis player.  I’m in 10th grade and, completely disinterested in what high school has to offer me, tennis is an anchor that prevents me from going adrift.  Today our English professor has us reading ‘A Defense of Poetry’ by Percy Shelley and discussing the philosophy of Romanticism.  Poetry is of little interest to me, but as I sleepily glance through the pages I come across a sentence that catches my eye: “Poets are…the mirrors of the gigantic shadows which futurity casts upon the present; the words which express what they understand not; the trumpets which sing to battle, and feel not what they inspire; the influence which is moved not, but moves.  Poets are the unacknowledged legislators of the world. ” These lines have bottled the swirling smoke of emotion that drifts in and out of my young mind.  There is a language that can catapult me from the banal to the sublime.  For the first time in my life I say to myself what has to be one of the most powerful sentences in the world: I am a Poet.

The thing with being a poet is that the attendant assumptions about you can be misleading, dangerous, wrong.  For years I have been a chaotic whirlwind. Some days my mind is full of energy; I come up with dozens of world changing ideas; I neither need to sleep nor rest; I feel an unflinching sense of bliss and love of life.  Then other days I can barely move; the synapses in my brain seem to fire through molasses; my skeleton struggles to hold my body aloft; I care about nothing and feel an excruciating restlessness.  And for years this is either ignored or attributed to the disposition of an artist.

I spend much of my college years glued to a sofa, overwhelmed by depression.  Where others my age travel, hang out with friends and generally enjoy college life, my days are bleak and solitary.  Despite this, I manage to live in Spain for a year, bicycle across the United States, get a masters degree from Brown University and start an organization.

Now, at the age of 25 and two years after graduating from Brown, I can no longer ignore the vicissitudes of my soul.  I am the Executive Director of a non-profit; I have responsibilities that add additional pressure to my frail state of being.  A failed relationship threatens to sever the last chords holding me together.  The clouds darken to the point that I wonder how much more misery I can take.  And so it is that, finally, after 10 years are constant uncertainty and pain, I am diagnosed with bipolar II disorder (the milder form of the illness).  Bipolar is characterized by moods that swing from high-energy to low-energy, from creative to miserable.  For a year my doctor and I work to find the right cocktail of medications to treat my illness. Some of the medications make me extremely nauseated while others make me dizzy.  But the experimentation bears fruit: my moods are for more stable and the side effects are minimal.  I must always remember that I am not an illness, I am simply a human being that has an illness.