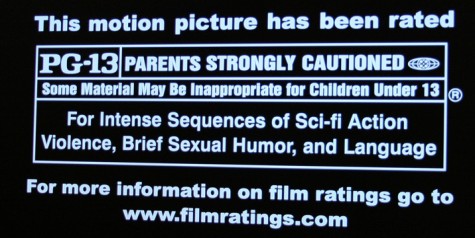 My favorite movie, The Dark Knight, starts off with a riveting bank heist.  The Joker leads a group of robbers who, thanks to the Joker’s machinations, kill each other, one-by-one, as the job progresses.  By the time the scene is done all involved, with the exception of the Joker, are dead, and the groundwork for the film’s moral battle between the Batman and the Joker is laid.

I have watched The Dark Knight, from start to finish, multiple times. I love everything about it: the dialogue, the dark, moody lighting, the plot, the acting.  And perhaps because of my familiarity with the movie, something occurred to me the last time I sat down to enjoy it: never do we see blood spilled from those that are shot or beaten to death.  Each murder is strangely antiseptic, cleaner than murder ought to be, or is.

I got to thinking about why that might be, which got me thinking about the Motion Picture Association of America (MPAA), ‘voluntary ratings,’ and de facto censorship.  Let me start by saying that I abhor the MPAA.  I find it repugnant and patronizing that an organization exists to determine what is appropriate for citizens of a free nation to watch.  But the lack of blood in The Dark Knight turned my hatred into concern that the MPAA’s impact is to impinge on art, so essential to the health of a democracy.  That said, before I get any further along, I should note that I don’t have any inside knowledge as to why murder in The Dark Knight is so “clean.” Rather, I am using this as an example of how the MPAA serves to censor art.

The MPAA describes its rating system as a tool “to decide what movies are suitable for [parents’] children to watch.” We all know the ratings, ranging from ‘G’ for General Audiences to ‘R’ for Restricted and ‘NC-17’ for No one 17 and Under Admitted.  What we may not know is that, although the ratings are voluntary—meaning that they are not enforced by law and theaters are free to ignore them—in practice they are almost never ignored. Why?  The major theater chains, as well as the six major U.S. motion picture studios (including Paramount and Warner Bros.) all have their films rated and displayed.  As a result, unrated films are relegated to small, independent theaters and, therefore, fewer people see and pay for them.

So let’s go back to The Dark Knight and that conspicuous absence of blood.  The film has a rating of PG-13 and is listed as having “intense sequences of violence and some menace.” According to The Wrap, “on average, PG-13 movies make more than three times what R-rated films do at the box office in the U.S.” The Dark Knight grossed over $1 billion at the box office. Is it possible that it would have been far less profitable had it been rated ‘R’?  I don’t know, and that’s not the point.

There’s a lot of controversy about how the MPAA’s rating work in practice: why violent films are often PG-13, whereas those with nudity are rated R, and so on.  But I don’t care about how they rate films so much as why they do and what impact they have on the art of filmmaking.  Indeed, what scares me is the possibility that the makers of this movie—and countless others—self-censor so as to get the rating most likely to make money.  Self-censorhip of this kind is dangerous for two reasons.  First, it enables a small group of people—the raters–to impose their artistic sensibilities on the rest of us.  And second, it forces artists to modify their art in order to adhere to those arbitrary sensibilities.  Going back to that opening scene, what would it mean to see blood?  For starters, shooting someone makes them bleed: ignoring that ignores reality.  What’s more, in a sanitized world, where murder looks more like fainting, children—whom the MPAA is doing so much to protect—get a fake view of reality.  And finally, if the filmmakers chose to alter any aspect of that scene so as to comply with a voluntary rating, then de facto censorship was at play; I don’t know many people eager to defend censorship.

Do We Even Need Ratings?

So I would like to conclude by asking if we need any sort of film rating system at all.  In the Web 2.0 era, concerned parents can easily do a Google search and learn all about the movie they’d like to see; they can make their own decisions.  Yes, the MPAA rating system is incredibly easy to use, but it is also incredibly deceptive.  If one man’s trash is another’s gold, then one rater’s excessive cursing is another moviegoer’s trenchant dialogue.  Lastly, I want to clarify one point: I am NOT saying that there’s anything wrong with artists thinking about money.  As the director of a nonprofit, I understand that nothing—not art, not social justice—can exist without a viable business model.  But what I AM saying is that self censorship skews everything around it: what the artist does, what the art lover sees and what the museums, playhouses and cinemas make available to the public.

(Lastly, an interesting note: as I was doing research for this post, I was fascinated to learn that the current Chairman and CEO of the MPAA is Chrstopher Dodd, who served for 30 years as the U.S. Senator from Connecticut.)