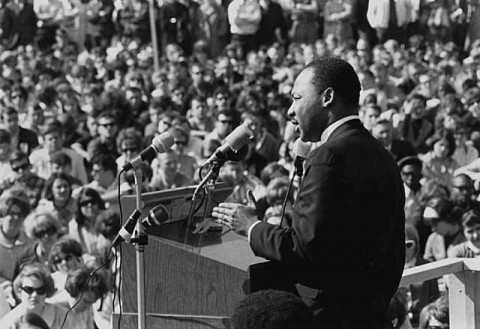 The Power of the Spoken Word

I don’t think it’s a stretch to say that were it not for his oratorical skills, Barack Obama would not be president of the United States; before his speech at the 2004 Democratic National Convention he was a complete unknown on the national stage.  In the same vein, it’s hard to imagine the civil rights movement without the soaring rhetoric of Dr. King.

In both cases, success was made possible by an army of lawyers, accountants, organizers, strategists, marketers, policymakers, and protesters.  Civil rights had the Southern Christian Leadership Council, the NAACP, the Nonviolent Student Coordinating Committee, the ACLU, and others; Obama had the Democratic party machine, his own campaign team, and countless other entities supporting him. Yet the spoken and written word were what gave these movements their raison d’etre.

How powerful is it to know that the vibrations of your vocal chords can change the world?  Over the past six years I have given countless talks: to groups of high school and college students, bankers, social service workers, nonprofit executives, and all manner of conference attendees.  The more I’ve pondered the ways in which I can better the world, the more I’ve come to treasure the chance to speak.  Standing before the audience, I can choose to draw the firmament into my lungs and emit something purposeful, beautiful, searing.

It took me a while to realize that people want to be inspired; they would much rather hear me speak of Justice and Beauty than of justice and beauty.  There is magic in the union between the magical and the mundane, and I can choose to be the magician.

Yesterday I had the chance to speak at two events: a training of our latest cohort of Financial Coaching Fellows, and a gathering of Brown students interested in learning more about social entrepreneurship.  I can’t claim to be anything more than an above-average speaker, of course, but I am proud of my willingness to attempt to stir the soul. I strongly feel that part of my job is to use language to inspire others, for I long ago accepted that only by activating the hearts and minds of others can I hope to magnify the good I do in my lifetime.

Next time you have the chance to speak, think about what you would want to hear if you were in the crowd.  Think of how many times you have been bored by a speaker, and the few times you have felt something come alive. We know not on what beach the waves of our hearts will crash; only by agitating the waters can we hope to reach the feet of someone eager to wade into the sea and change the world.