Now that that holidays are over and I have had a chance to catch my breath and think about 2018 (I wrote a post about my goals for Capital Good Fund in 2019, which you can read here), I figured it’d be fun to quickly write down some of my highlights of the year:

(1) Becoming a father. At 11:11 PM on Saturday, December 22nd, Bianca gave birth to our son Richard Alexander Posner. His due date was that Thursday the 27th, and the story of why he was born a few days early is interesting. When Bianca went to sleep the night before (Friday), she noticed that her palms and the soles of her feet were itchy, which can be a sign of cholestasis, a condition that can be harmful to the baby. Now, I had planned to complete a tattoo that day, a tattoo that I had begun a few weeks prior (photo bel0w) and had told the tattoo artist the day before that, “The only way I won’t be there is if Bianca goes into labor, but that’s not very likely!” (Incidentally, completing the tattoo was also one of my goals in 2018, though there is some work to be done to finish it this year!) 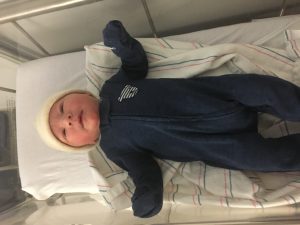 When Bianca woke up that morning and was still itchy, she called the doctor, who suggested that we come to the hospital to have her checked out. We were so sure that it was nothing, we didn’t even bring our “go bag”–in other words, we weren’t prepared to stay and have a baby that day! However, both because there isn’t a quick way to definitively test for cholestasis and because her blood pressure was a little high, the doctors suggested that we induce her, and about 15 hours after we arrived, Richard Alexander Posner was born. What a day! (Richard is my dad’s name and Alexander was my paternal grandfather’s name.)

Tattoo in progress; it still needs to have the coloring completed.

2) Losing Weight. In October of 2016, just a few weeks before the fateful and nightmarish presidential election, I got hit by a car while biking to lunch. Although the crash itself wasn’t that bad–I didn’t even realize I was really until an hour after the fall because I hadn’t hit the ground that hard–it resulted in a broken elbow that, tragically for me, would eventually require surgery and has never fully healed. At the time of the crash, I weighed about 173 pounds, had bicycled at least an hour a day for two-and-a-half years (and was therefore extremely fit), and had been regularly participating in bike races. I was obviously unable to continue cycling until the broken bone healed, but the shock and disappointment of breaking a streak of which I had been so proud began a downward slide for me personally that was then pushed into hyperdrive when Donald J. Trump, that most despicable and disgusting of human beings, won the election for president of these United States of America. The slide only got worse and steeper as time passed and I realized that, though the bone had healed, there was clearly some lasting damage that neither physical therapy nor rest could fix.

This slide didn’t just manifest itself in my not bicycling for a few weeks or months, but rather in my mental state declining and my caloric level to not only stay at the level when I was exercising, but to increase. It didn’t take long for me to gain weight, and by January of 2018 I had hit a peak of 195.2 pounds (I track my weight and everything I eat using an app called Lose It). At that point, I figured that it was time to put an end to this unhappy state of affairs, and I resolved to reach 170 by the end of the year. Of course losing weight, while not hard on paper (all you need to do to lose a pound per week is to burn 500 more calories per day than you consumer), requires discipline that can be hard to muster with the various stresses of life. And you can see that in the graph below: had I perfectly followed my plan, I would’ve reached 170 pounds in about 25 weeks, or sometime in mid-summer. Instead, I lost weight in fits and starts, but you can see that the general 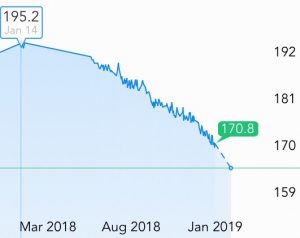 trend was slow and steady, and at my most recent weigh in I was at 170.8. That’s almost 25 pounds lost! Here is a link to a blog post I wrote before this whole debacle about another time in my life, just after college, when I had gained and then lost a lot of weight: On Weight Loss and Willpower.

Now that I’ve hit this goal, I can start working toward my next one: to get back into racing shape on the bicycle by Spring, which means that I will have to spend the next few months at the gym strengthening the muscles around my left elbow and right shoulder (oh yea, my shoulder is all messed up) so that I can ride without pain.

(3) Getting published. I have written poetry since I was 15–nearly 20 years. However, apart from a poem I had published in 2001 in a publication put out by California State University, Northridge (where I got my BA), my many dozens of poems had gone unpublished apart from my personal website. In 2016 and 2017 I decided to start sending my work to a variety of online and print journals, and, not knowing any better, I had no doubt that the acceptances would start rolling in…What followed was a succession of 45 rejections that at first depressed and angered but then forced me to rethink my work. I began to read more poems and more about poets and poetry, and then incorporated my learnings and findings into a new round of poems that I felt were more mature, had stronger imagery, etc. And lo and behold, I started getting approvals: by the end of the year, I had had 8 poems published in five different journals, and one of the poems, The Machinery of the State, was nominated for the Pushcart Poetry Prize (the winners will be announced in 2019). Here is a link to that poem.

To go from utter self-confidence to utter despair, and then recover to the point that a new round of poems gets published (all of the accepted pieces were written after my “aha” moment in early 2018) is wonderfully satisfying and self-affirming, although I still doubt myself and the quality of my work. Being a poet is hard, but I feel like I’m finally progressing! I’m excited to see how far I take it.

(4) Growing Capital Good Fund. Running a nonprofit is also hard, probably harder than writing poetry, and in 2018 I certainly had my share of challenges as a CEO–funding and personnel challenges at the top of the list. But we also had a banner year, setting all manner of records. For instance, we financed a total of $3 million in loans, up from $2 million in 2016. We served a record 175 clients with financial coaching. We hit our highest total assets ever, roughly $4.5 million, an increase of $1 million over 2017. And we did all this while maintaining solid loan repayment rates, deepening our market presence in Florida and Massachusetts, and achieving tremendous social impact!

(5) Reading. I’ve already mentioned that I track everything I eat, my weight and my exercise, so it should come as no surprise that I also track every book I read. I didn’t have a set goal for 2018, but I ended up reading 70 books ranging from biography, to history, to autobiography, to fiction, to philosophy. In short, I tried to read anything and everything, and I was aided by the fact that I spend 1.5 hours per day, Monday – Friday, listening to audiobooks during my commute to and from work. I hope to read even more in 2019!

Well, those are the highlights. What were yours? What are your goals for 2019? You may be interested to check out my post On New Year’s Resolutions & Behavior Change.

[UPDATE: My Lady Liberty-themed tattoo was completed on Saturday, January 5th. Below is a photo of the final design:] 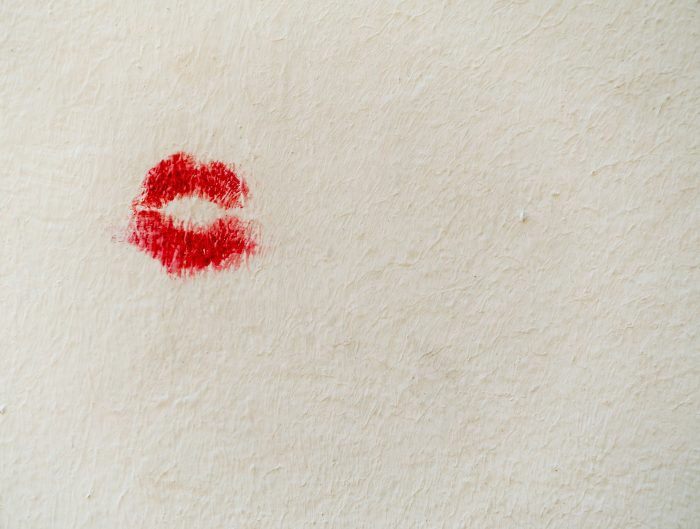