Philly SAVE OUR POSTAL SERVICE Rally 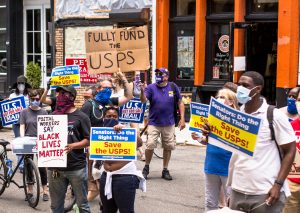 VIGIL in front of the Ben Franklin Post Office

– Make a call to your Senators to vote yes on the next stimulus bill, (View suggested script at: shorturl.at/gjyD7 )

– Come to the first post office in the US, where Ben Franklin worked in 1775, at 316 Market Street at 11am. We invite you to come hold up signs and banners, everyone spaced 6 feet apart, for the benefit of the press and passersby to SAVE OUR POSTAL SERVICE.

– A caravan for those who want to stay in the safety of their vehicle can circle between the B. Franklin post office and Senator Toomey’s office at 2nd and Chestnut.

The USPS is threatened with job loss, cuts, closures, outsourcing and union-busting as the postal service is experiencing precipitous revenue loss, running out of money as early as this fall. The Trump administration, the Republican-dominated Postal Board of Governors and the president’s crony, the newly appointed Postmaster General, are seizing the economic crisis as an opportunity to open the road to privatization

June 23 is the day of an American Postal Workers Union-sponsored action in DC, APWU Local 89 in Philadelphia and other cities.

June 23 is a week after the new Postmaster General takes office.

Your voice is needed to help SAVE OUR POSTAL SERVICE!

What’s at stake? Thirty percent of over 600,000 postal jobs are held by people of color. Veterans hold over 20 percent and women over 40 percent of postal positions.

The U.S. Postal Service provides universal mail delivery of medications (nearly 4 million daily), stimulus checks, census forms, ballots, medical supplies (including test kits and the coming vaccine) at the lowest standardized prices in the world. Only the USPS makes regular postal deliveries to remote islands and secluded areas that would not be profitable for a private business. In rural and low-income regions where broadband isn’t commonly available, it provides a much-needed lifeline of communication.

Campaign for a Just Philly budget

(Ad paid for by Communities and Postal Workers United).