A few weeks ago, shaken by the horror of Heat Domes and wildfires encircling the globe, I decided to write a series of essays focused on solutions to the climate crisis. In the first post, I wrote about the banking system and why I closed my account with Bank of America and opened one with Amalgamated Bank. Today my focus is on going solar: the costs, benefits, considerations, etc. Fair warning–we’re going to get into the weeds. I hope you’ll find it worth your time.

When I first learned about solar photovoltaic cells, I was blown away. Humanity has figured out how to take solar radiation and transmogrify it into clean, silent, free energy, just as plants evolved to turn sunlight into food. Every time I see an unshaded, south-facing roof, I picture solar panels being installed on it, and when I do I see a hopeful future where the air is healthy, jobs are good-paying, and the climate is stable. This isn’t a far-off pipe dream. According to the International Energy Agency, solar is “now the cheapest electricity in history.”

I have now installed, or am about to install, solar systems on four buildings over 12 years, and I’ve learned a lot during that time. When I graduated from Brown in 2009, I decided to stay in Providence to grow Capital Good Fund. In the wake of the 2008 financial collapse, housing prices were rock-bottom, so I purchased a condo and, in 2011, installed on it my first solar array. That first system was rated for 3.68 kilowatts (“kW”) and cost $26,500, before a 30% federal tax credit, which means that the gross system cost was $7.20 per installed watt, or a net cost of $5.04 / watt.

Before continuing, I should clarify and explain some concepts. A kilowatt equals 1,000 watts, so a system rated for 3.68 kW can produce a maximum of 3,680 watts under ideal conditions (panels are most efficient when it is sunny but cooler). To put that into perspective, a typical LED light bulb might use 10 watts, so at peak output, my system could power about 360 LED bulbs (there are some efficiency losses when the Direct Current, or DC, power produced by the panels is converted to the Alternating Current, or AC, power we use in our outlets.) Of course, power output varies throughout the day: less in the morning, more in the middle of the day and afternoon, and then less in the late afternoon / sunset. Output also depends on cloud cover and the time of year.

The key price metric is cost per installed watt, calculated as the total system cost ($26,500) divided by the number of watts (3,680). We calculate this on a gross-cost basis (before federal tax credits) and net-cost (after federal credits). Back in 2011, the Solar Investment Tax Credit (“ITC”) was 30% of total system cost, meaning that, so long as one had enough taxable income to benefit from it–I didn’t, but I was able to roll the credit over for three years and eventually claim all of it–the actual cost / watt was 70% of the sticker price. That $26,500 gross cost included not only the panels themselves, but also labor, the racking systems (what the panels are placed on), the inverter (what converts from DC to AC power), and so on. It’s also important to understand that energy production is measured in watt or kilowatt hours: if you produce 1,000 watts for an hour, we call that a kilowatt hour, or one kWh.

With respect to the ITC, recall that in a recent post, I talked about how making it refundable, as opposed to a credit, would make a huge difference. I was fortunate to be able to claim the credit, albeit over the years; but many lower-income homeowners simply do not have enough taxable income to benefit from the ITC. As a result, this crucial benefit has become a subsidy for the wealthy that further excludes marginalized families from the green transition. Making the ITC refundable would mean that, when filing taxes, you would simply check a box and receive a check for 26% of the system cost (as solar energy has matured, the credit has gone down, from 30% in 2011 to 26% today; eventually it will phase out entirely.) If you want to ensure that the infrastructure bill makes the ITC refundable, please sign onto the letter of support at this link and call your U.S. Rep and Senators.

Most solar systems are “Net Metered,” meaning that any excess power you produce during the day is fed back to the electric grid, spinning your meter backwards. For instance, let’s say that, from 1 – 2 PM on a sunny day, your system produces 2 kilowatt-hours, but your house only consumes 1: the extra 1 kWh is sold to the grid and you receive a credit for that power. (Electricity is billed per kWh, usually between $.10 and $.2, depending on the utility and time of day.) Then, from 8 – 9 PM the sun is down, so you aren’t producing any power, but you consume 1 kWh: now you are, in effect, drawing on that credit.

This is a simplified explanation, but the hope is to design a system that, at the end of the year, produces as much power as you use, completely eliminating your electricity bill. One frustrating side note is that most utilities disincentivize building systems that produce more power than you use, because they won’t pay you for that extra power. In other words, suppose your system produces 20,000 kilowatt-hours in a year and you only consume 15,000. In most states, you will receive little to no economic value for the excess production. Which is really stupid, since the larger the system you install, the lower the cost / watt. Why utilities do this is a story for another time.

A final consideration I want to highlight is efficiency, which is defined as “the ratio of energy output from the solar cell to input energy from the sun.” Most panels these days are anywhere from about 18% to nearly 23% efficient.

Okay, solar primer done. So in late 2016, Bianca and I purchased a house in Dedham, MA, and installed a much larger system. The condo in Providence was 1,400 square feet, and the 3.68 kw array pretty much covered all of our usage. But the new house was 3,300 square, and, in addition to our normal usage, we also needed to cover the power draw of two electric vehicles being charged at home. To do that, we put up a 12.83 kw system for $49,109, which resulted in a gross cost / watt of $3.82 and a net cost of $2.83. Of note as well is that even as the cost / watt had dropped by half in just seven years, the efficiency of the panels had increased from 15% to 18%! Not only are panels getting cheaper, they are also getting better at converting light into energy.

Since 2016, despite driving two electric cars, we have never had to pay for electricity. Moreover, I’ve yet to have to do any maintenance on any solar system: they literally sit on the roof and, without my thinking about it or spending money on repairs, create clean electricity. I find that amazing, poetic, and beautiful. I’m so enamored of solar panels that I will soon be tattooing a design by my dear friend, Marie-Laure Couet: 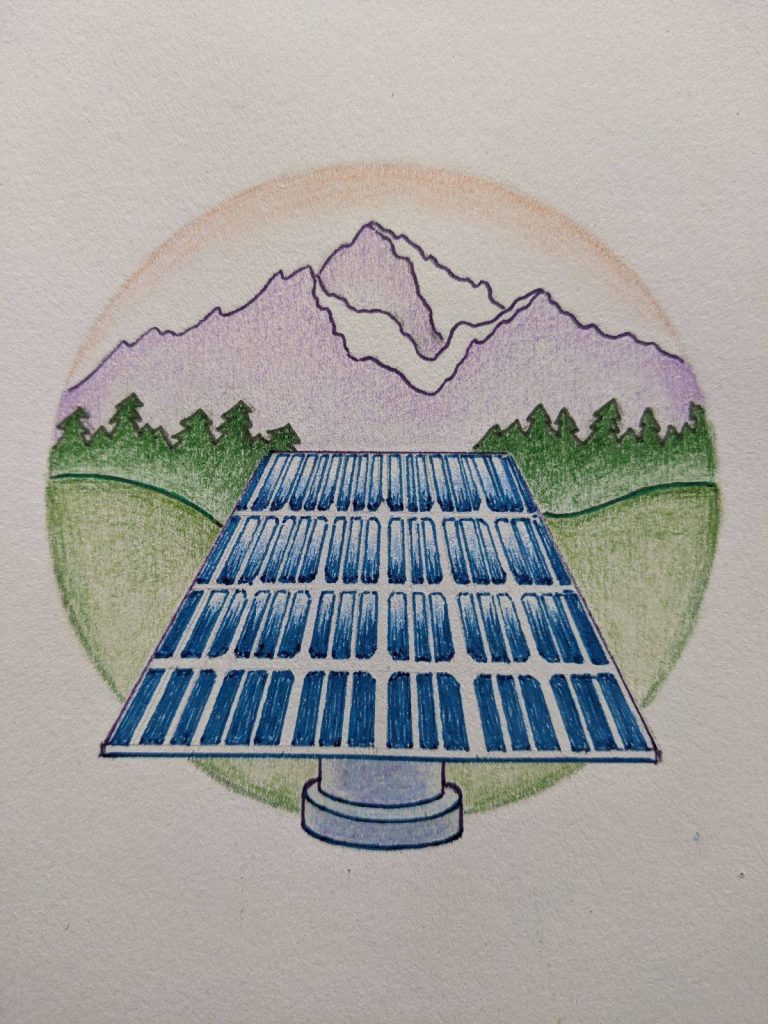 The first thing I did after we purchased a house in Los Angeles (we are moving on August 26, 2021; read about the move here) was to put up solar panels. This time I decided to go really nuts. Not only did I put up a much larger system–16.8 kw compared to 12.83 kw–but it’s much more efficient–22.7% compared to 18%. What’s more, given that there is much more sunlight throughout the year in LA than in Dedham, the system will produce a lot more power (about 16.5% more). And lastly, in addition to the system, we also installed at 26 kw battery backup system that will allow us to do two things. First, in the event of a power outage, we’ll be able to run most of our house on the batteries for about two days–and more or less indefinitely if the weather is sunny. Second, excess power produced by the panels during the day will be stored in the batteries, and then sold back to the grid at a higher price in the late afternoon and early evening–when power usage is still high but solar power drops and then goes away entirely. Battery backup, at the residential, commercial and utility scales, is essential to a grid that is fully powered by renewable energy: it’s the only way to address the intermittency of solar and wind energy.

The cost / watt of this newest system is just $3.48 gross and $2.64 net, even as the system is far more efficient, has a lower degradation rate, and a better warranty than any panels I’ve ever installed. These panels are the best on the market, and I went with them because the company, Sunpower, makes everything: the solar panels, invertors, racking system, control modules, software, and battery backup. Oh, and they also install them, as opposed to outsourcing that to a third party.

The next burning question is how long does it take for these systems to pay for themselves? There are a lot of factors, most notably: the cost of local power; the rate at which that cost increases over time; any state and local incentives, such as rebates and renewable energy credits; and how much power you use. On the LA house, I expect that the panels will pay for themselves in about seven years, slightly better than the current average payback of eight years. Solar also increases your property value (but that increase is often excluded from the valuation for property tax purposes) and extends the life of your roof.

With respect to the payback on the battery backup system, the truth is that I just don’t know: utilities are still figuring out how to value the energy released from the batteries. The gross cost is $23,450, and the net cost, after federal and state incentives, will be $12,353. It’s too soon for me to say how much I’ll save per year. But given that we’ll be living in a fire zone and that power outages are expected to be relatively common occurrences, the advantage of never losing power is hard to overstate. Below is a (not great) photo of the just-installed battery system (the packs are on the left; on the right are the control modules, invertors, and the like): 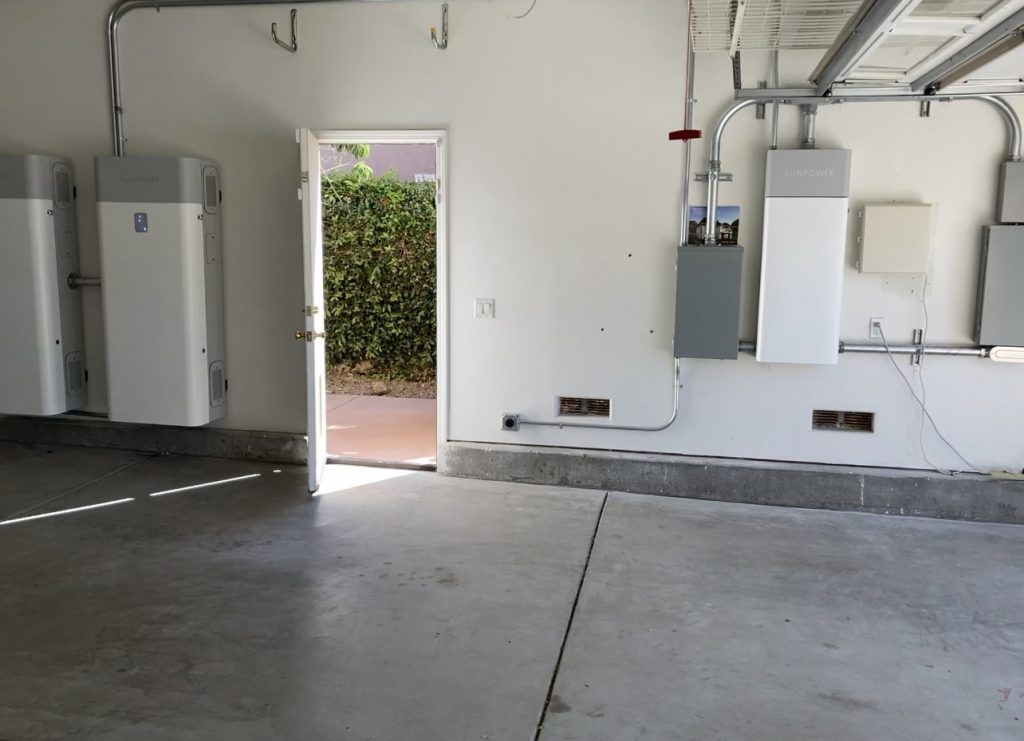 The last system I’ll be installing is on the building that Capital Good Fund recently purchased in downtown Providence. It’s a 24 kw solar array that will have an efficiency of 20% and cost just $2.77 / watt (nonprofits can’t claim the tax credit because we have no taxable income, another reason why the ITC should be made refundable).

Below is a table summarizing the four arrays I’ve installed, including the cost / watt and panel efficiency:

If you are interested in going solar, there are a ton of options out there. Sunpower and Sunrun are two companies worth checking out; both partner with lenders (including, hopefully soon, Capital Good Fund!) for financing, and both also offer what are called solar leases and Power Purchase Agreements. Energy Sage has great information about panel manufacturers, installers, payback periods, the benefits of a solar loan vs lease vs PPA, and more. And I’d be delighted to talk solar long into the night!