In two weeks, voters across the country will decide whether to keep control of the House and Senate in the hands of Democrats, or give one or both chambers of Congress back to the party of Trump, insurrection, election denialism, COVID denialism, race-baiting, and sedition. It is a sad commentary on the state of affairs in America that despite all that happened before, during, and after the Trump Administration, Republicans are favored to win control of the House.

These are desperate times. The issue is not that I disagree with the GOP on taxation, social-spending, or foreign policy; the issue is that they will burn down our Democracy and turn us into a theocracy at the drop of the hat, so long as it gets them votes and power. And yet, if you listen to or read the news, you’ll be forgiven for thinking that at stake in this election are more ordinary matters, like whether to reduce aid to Ukraine, or how to deal with inflation. The very survival of our system of democratic self-governance? Well, that doesn’t come up much.

But while the desperation of the moment doesn’t show up in the NY Times or on NPR, it sure does come across in my digital and physical mailboxes. In fact, as an active donor to progressive candidates and causes, I am inundated with messages like this:

To be sure, Republican candidates are sending out emails like this as well; and at least Democratic messaging isn’t despicable and disgusting. But what I find interesting is how normal all this has come to seem–the blasé attitude of the media in the face of insanity, that voters are largely ignoring said insanity, the general desperation of political messaging. 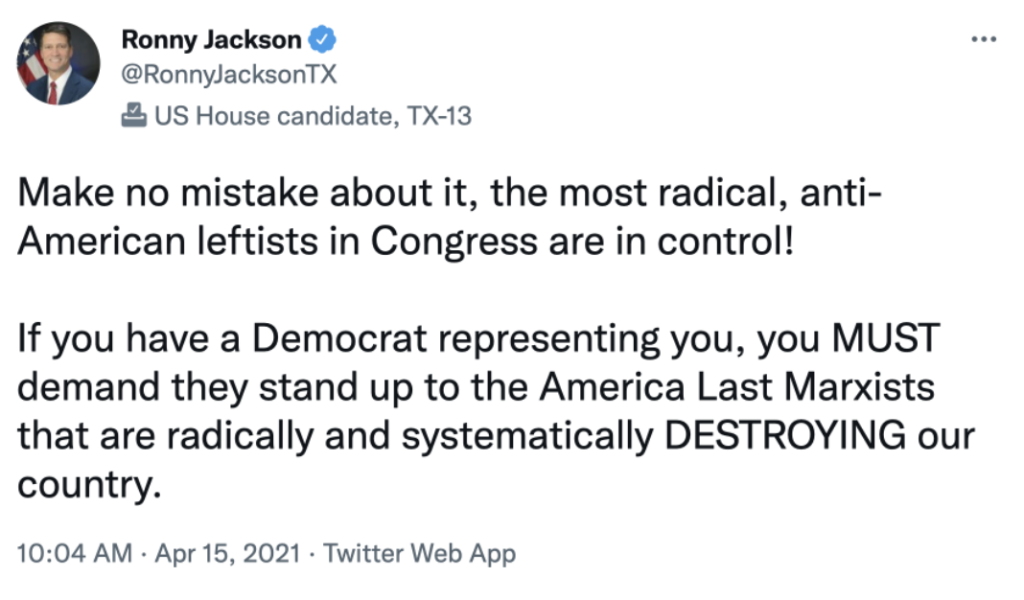 I was recently in Atlanta for a conference, and whenever I passed a TV, a political ad was playing: for Senator Warnock or his opponent, Herschel Walker, Governor Kemp or his opponent, Stacey Abrams, and so on. Each ad proclaimed that the sky would fall if the opponent were to prevail–how we would either become a communist or fascist dystopia, with immigrants overrunning our borders or a woman’s bodily autonomy (even further) diminished.

I can see how, before long, a voter might start to tune this out and fall back into the well-worn “both sides are the same” cycle of cynicism that creates a kind of get-out-of-jail-free card when one side has not only lost its marbles, but become dangerous. Because the thing is that no rational analysis of the situation can yield any conclusion other than that the GOP IS dangerous and if they win we DO risk a dystopian future. The question is, how do Democrats convey the danger without sounding like…Well, like that email from Val Demings, where the message is that if I don’t give her (even more) money, I’m a bad Democrat? How do we avoid desperation fatigue when the threats we’ve faced for six years are growing more severe, not less? And how do Democrats get their message out when my email inbox looks like this: 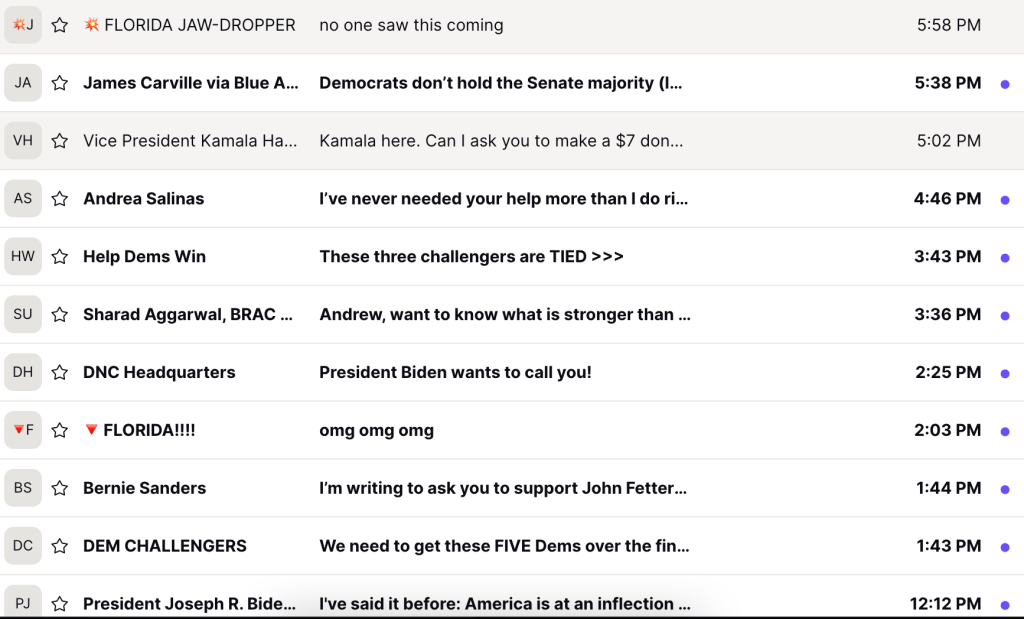 A fundamental problem here is that our elections are often won and lost on whoever raises the most money to fund ads, get-out-the-vote efforts, lawyers and advisors, digital marketing, and more. Unlike other democracies, which have much shorter campaign seasons, limits on political advertising, and, in some cases, publicly-funded campaigns, America’s system is paradigmatic of unfettered, unregulated free-market capitalism run amok. Just consider what happened after the Supreme Court opened the floodgates of political giving in the Citizens United case. According to Open Secrets, in the decade after Citizens United, giving by “non-party outside groups” like Super PACs totaled nearly $4.5 billion, compared to just $750 million “over the previous two decades.” The also note that 2010 – 2020 “was by far the most expensive [decade] in the history of U.S. elections, [with] Independent groups [spending] billions to influence crucial races, supplanting political parties and morphing into extensions of candidate campaigns.”

Craziness within a crazy system is not a surprising outcome, and we cannot address the craziness unless we play the game and win. So God bless the endless emails, mailers, radio and TV ads, and social media posts. God bless the “we are going to win…unless you donate” and the “we are about to lose…unless you donate.” I don’t know if they are working, or if they are the most effective means of raising money and convincing voters; but it’s a small price to pay for the chance to avert catastrophe.

All I know is that if Democrats can keep the House and get 52 votes in the Senate, we can finally get rid of the filibuster and overturn Citizens United, codify into law a woman’s right to choose into law, and enact numerous protections of our democracy. But If we lose, expect dozens of impeachments, frivolous subpoenas, government shutdowns, attempts to privatize social security, and who knows what other horrors.

In short, ignore the emails, ignore the polls, and ignore the pundits. The only way to win an election is to have more people vote, which starts, of course, with you voting, but also means giving to candidates and campaigns, and encouraging everyone you know to cast a ballot. Don’t let desperation turn to despair, no matter the outcome. And spare a thought for the poor souls who have to write all that ad copy, who must come up with inventive ways to break through a hurricane of words and images and videos to grab your attention–at least long enough to get you to donate and vote.

Finally, here are some ways to get involved, NOW: