45 to Stop 45: an Idea to Ignite Mass, Nonviolent Protests

“Ralph Waldo Emerson seemed to foresee the lesson of the Senate Impeachment Trial of President Trump. ‘When you strike at the King,’ Emerson famously said, ‘you must kill him.'” [1] That is Donald J. Trump on Twitter, drawing the wrong lesson and quoting from a NY Times article which argues that in the wake of his acquittal, he is more dangerous than ever. [2] Trump now thinks he is a king, acts like a king, and is deferred to by the Republican Party as though he were a king. And since his acquittal, he has taken dangerous, autocratic steps to consolidate his power, firing those who dared testify against him and, through his lackey, Attorney General Barr, renewing investigations against his perceived enemies and going easy on those loyal to him. [3]

We always knew Trump was a grave threat to our Democracy, but for the past three years we have waited for something or someone to save us. It hasn’t worked. Nothing has reigned him in–not Mueller, not Impeachment, not, in any meaningful way, the courts, and certainly not the Senate. Now we face the terrifying prospect that a man with dictatorial tendencies, freed of any constraints on his behavior, will cheat to win the 2020 election, at which point the American experiment of self-governance may reasonably be judged a failure.

So where, given the gravity of the moment, are the mass protests? Why are we not reacting to the real possibility of losing our freedoms and our futures the way others have recently done in Hong Kong and Puerto Rico? It’s not that people aren’t trying. Groups such as the Kremlin Annex, SOS America, Stand Up America, and the Women’s March have staged protests and rallies, but none of them have ignited a broader movement. I don’t know what’s holding people back, whether it’s complacency, exhaustion, and demoralization; the feeling that it won’t matter; the logistics of organizing large protests, especially in such a large country; or the hope that someone else will solve it. But the fact is, protests are sporadic, isolated, and easy for those in power to ignore. 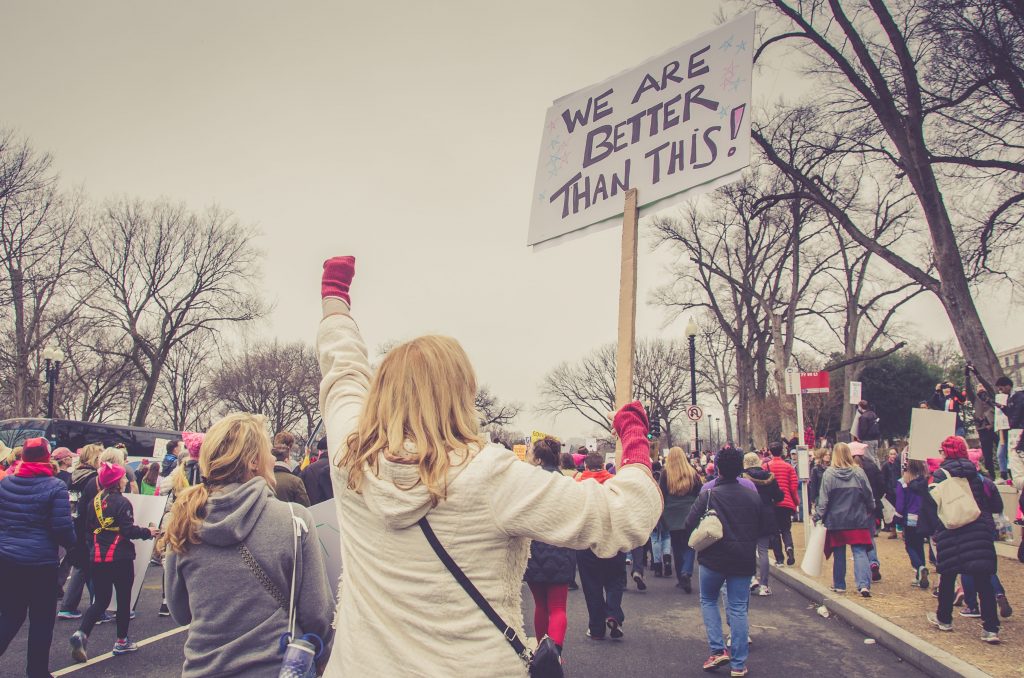 Now one might say, “We are just nine months away from the 2020 elections. Why not just wait to vote him out of office?” After all, groups like Indivisible and Swing Left are doing on-the-ground work to mobilize voters; why not focus 100% on voter outreach and the like? Well, to quote Adam Schiff’s magisterial closing argument in the Impeachment Trial:

“Can we be confident Americans and not foreign powers will get to decide [the election[ and that the president will shun any further foreign interference in our democratic affairs? The short, plain, sad, incontestable answer is no, you can’t. You can’t trust this president to do the right thing, not for one minute, not for one election, not for the sake of our country. You just can’t. He will not change, and you know it… The plot goes on, the scheming persists and the danger will never recede. He has done it before. He will do it again. What are the odds if left in office he will continue trying to cheat? I will tell you. 100%…If you have found him guilty and you do not remove him from office, he will continue trying to cheat in the election until he succeeds.”

It’s up to us. Here’s my proposal to spark mass, nonviolent protests that will be large enough to make a difference. To be clear, I am still fleshing out the idea. More, I can’t do this without a lot of help. I want your feedback and suggestions:

I have purchased the domain 45toStop45.com and am working to design a simple website. The idea is to protest for 45 minutes a day for 45 days, and the goal is for a critical mass of protests to erupt such that Trump resigns (unlikely) or Congress takes meaningful action to rein him in and secure our elections (possible: there are election security bills sitting on Mitch McConnel’s desk, and there’s nothing stopping another impeachment.) At the very least, Trump and the Republicans will be on notice that cheating will not be tolerated, that we will mobilize in even bigger numbers if they try to rig the election.

Anyone, anywhere will be encouraged to take 45 minutes a day to peacefully protest–dropping banners over highway overpasses, holding signs at roundabouts, handing out leaflets at office cafeterias, etc. Each protestor will become a node; as they attract more to join them, the nodes will get bigger and bigger, strengthening the national network. At some point, a threshold will be crossed and massive protests will take hold–blocking traffic, disrupting business-as-usual, making it clear that the status quo is unacceptable. We will not allow our Democracy to be co-opted. We must not allow Donald Trump to cheat to win another election.

Of course, the devil is in the details. For instance, the outcomes I just outlined are vague: are they the right goals around which people can coalesce? How do we define success? Is another impeachment worth attempting? Is the passage of election security legislation sufficient? What’s the draw to get people to show up once, let alone over and over? How do we get media attention? How much of this should be coordinated from the top versus delegated to individual nodes? And, most importantly: will this work?

To that last question, I say, we have no choice but to try. But the others deserve serious consideration. Fortunately, there are myriad tools to leverage. Gene Sharpe, for instance, wrote a kind of bible for nonviolent protest called 198 Methods of Nonviolent Action; Saul Alinsky wrote 13 Rules for Radicals; and Beautiful Trouble offers a bevy of toolkits. Here are some of Alinsky’s relevant rules and how this campaign stacks up:

Rule 1: Power is not only what you have but what the enemy thinks you have
Unfortunately, Republicans no longer seem to care about the will of the people. Just look at their vote to not even allow witnesses and documents in the impeachment trial, even though 75% of Americans supported it. I’m not sure what levers of power we have to pull, since normally that would be at the ballot box, but as we have seen, but we can’t put all our faith in that tool.

Rule 5: Ridicule is man’s most potent weapon
This is Trump’s Kryponite: he cannot stand being made fun of. Insecurity and greed are the two biggest motivators of his life–and they are connected. The campaign must leverage ridicule in every possible way, making fun of his wealth, his speech, his appearance, anything. Mike Bloomberg commenting on how much wealthier he is than Trump, for instance, must drive him batty.

Rule 6: A good tactic is one your people enjoy
This one worries me. How do I make it fun to protest for 45 minutes a day, especially if at first there will be few protestors?

Rule 7: A tactic that drags on too long becomes a drag
Here I’m on solid footing. By limiting the campaign to 45 days, I give it time to build momentum, but also ensure that it won’t “become a drag.”

Rule 10: The major premise for tactics is the development of operations that will a maintain constant pressure upon the opposition.
What happens after the 45 days? This must be clarified. Are we transitioning to national mobilizations, such as a strike?

Rule 13: Pick the target, freeze it, personalize it, and polarize it.
Trump can’t be the target, or the sole target. It must be Republicans, primarily, but also getting Democrats to play hardball, for instance by using the power of inherent contempt to compel witnesses to testify in the House. There are a lot of Senate Republicans up for election, so that’s a pressure point. There are also others who could be standing up to Trump: prosecutors and government officials can resign (like the prosecutors on the Roger Stone case; business leaders and associations can write letters of support, like these 1,100 ex Justice Department officials; and unions can announce boycotts of companies that, say, advertise on Fox News, to name a few examples.

I wouldn’t be advocating for this kind of action if I had faith that there would be a free and fair election in November. But, like Chairman Schiff, I have none. Already, it is clear that Trump is going to make use of and benefit from what a recent Atlantic article is calling a billion-dollar disinformation campaign. The reporter, McKay Coppins, notes that, “In conversations with political strategists and other experts, a dystopian picture of the general election comes into view—one shaped by coordinated bot attacks, Potemkin local-news sites, micro-targeted fearmongering, and anonymous mass texting.” Further, “in the hands of a president who lies constantly, who traffics in conspiracy theories, and who readily manipulates the levers of government for his own gain, the potential [of these tools] to wreak havoc is enormous.” [4]

I don’t know if this will gain traction, or if I’ll just end up standing around, alone, with a sign. I also know that many thousands have been organizing on a daily basis since before his election; I can’t lay claim to any special status as a “Trump resister.” All I can hope is that I’ll have the luck of launching a campaign with the right message at the right time. But, as I said, I need your help. I need web designers; people who can create a toolkit to make it easier for others to launch local protests; press releases and media contacts; etc.

What are your thoughts? Let’s brainstorm!

[2] Baker, Peter. While Stained in History, Trump Will Emerge From Trial Triumphant and Unshackled. The New York Times, 1 Feb. 2020, www.nytimes.com/2020/02/01/us/politics/trump-impeachment-trial.html.