This is an oversimplification, but one way to think about the Civil Rights Movement is that there were two philosophies underpinning the struggle for equality: Dr. King’s faith-based, inclusive, nonviolent strategy; and Malcom X’s Black Power, “the bullet or the ballot,” approach. Put another way, Dr. King believed that one could win over one’s oppressor through love, whereas Malcom X believed that doing so was irrelevant–the key issue is banding together so that the oppressed overcome their oppression by taking back power. Which one was right? Can, to modernize the question, love trump hate? I don’t know, but the goal of this post is to delve into that critical question (I’ve previously mused about this on my blog). 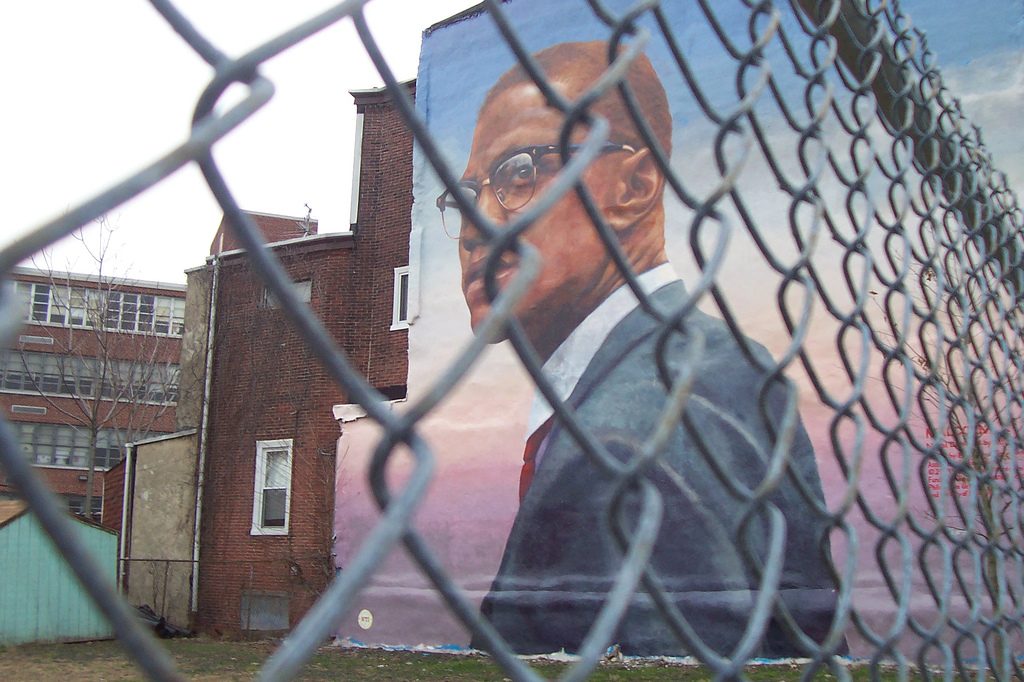 It’s easy to see why Dr. King has a national holiday and Malcom X doesn’t: mainstream America is able to sanitize Dr. King’s strident actions and language and turn him into a harmless saint, but the man who said, “Be peaceful, be courteous, obey the law, respect everyone; but if someone puts his hand on you, send him to the cemetery,” is too threatening for white America. In truth, neither man was as saintly or violent as their reputations: both were uncompromising in their fight for civil rights, both fearlessly stood up to evil, both deeply flawed. Which was more effective in making life better for African Americans? Sadly, at the time of their deaths (1965 for Malcom X, 1968 for Dr. King), neither felt optimistic about the future. That said, nonviolent direct action clearly did more to win over the average American to the cause and pressure the Johnson Administration to pass civil rights legislation. At the same time, by 1968 mainstream America had begun to lose interest in civil rights, distracted as it was by Vietnam, “free love,” drugs, music and the like. And by the 1970s, what was once a relatively cohesive movement had splintered, rendering it increasingly ineffective and relegating it to the fringes of American society. At some point, then, the disinterest of the mainstream began to render nonviolence ineffective, and I can see the argument that, in that scenario, love ceased to become a means to an end. (Dr. King believed that love was both a means and an end, which, to me, and to many, is a bridge too far).

Fast forward to 2018, and the state of affairs mixed. Yes, segregation is no longer officially legal; lynchings have ended; and we have even had an African American president. But across many measures, blacks are still suffering from racism. Mass incarceration is, as Michelle Alexander argues in The New Jim Crow: Mass Incarceration in the Age of Colorblindness, has taken away the rights of millions of blacks and warehoused them and their futures in prison cells. Blacks are murdered with impunity by the police–a new form of lynching. Blacks have higher rates of poverty, shorter life expectancy, and far less wealth than whites. And so on.

So what does all this tell us about how to address the evil of the Trump administration? What do we do about the fact that roughly 40% of Americans approve of a man whose bigotry, racism, xenophobia, misogyny, and corruption are obvious? Can love Trump hate; that is, can love win over this significant segment of the population? Probably not. Perhaps the right question is, can love win over the 20% – 30% of Americans appalled by the administration but unwilling to speak out, to take action? These questions have become relevant to me as I’ve wrestled with my response to Trump’s policy of separating families and throwing brown children into cages. My social media posts, never particularly loving and tolerant of bigotry, have become increasingly impolite, curse words adorning more and more sentences. On the one hand, I recognize that these post risk alienating people who might otherwise agree with me; but on the other, the argument that people of good will should engage in civil discourse while we march toward fascism drives me up a wall.

There is another wrinkle. I run a nonprofit, and many of our funders are financial institutions, foundations, and high-net-worth individuals whose politics are likely to be right-of-center. Is it worth risking Capital Good Fund’s ability to scale in order to express my rage in raw terms? Is my rage doing any good? Again, I don’t know. The best I can say is that I probably shouldn’t use offensive language but that, otherwise, I have a duty to speak out. After all, what good is my silence, what good is Capital Good Fund, if America becomes a dictatorship?

Still, it pisses me off that people seem to be more offended by offensive language than by the evil inspiring said language! My reply to those who have chastised me for my writings–and I have been chastised–is this: How bad does it have to get for YOU to speak out, as an individual or as a representative of a corporation? Would you say something if 5 brown children died in custody? 50? What about if Trump began ordering executions? If he suspended the Constitution and implemented emergency laws that effectively make him a dictator? Sadly, the answer is that, so long as people and companies are making money, they will say nothing. After all, what corporation in 1930s and 1940s Germany, Italy, Russia, or Japan spoke up? No, not only did they say nothing, they were more than happy to make money, even if it meant using slave labor. This is something I address in a poem I wrote called The Bottom Line, in which I ask a hypothetical corporate CEO, “Is there a line / You would not cross in service of the bottom line? / “Ask my lawyers and my board; I have time / Only to serve the bottom line,” he replies.

So, can love Trump hate? Well, love cannot convert bigoted and ignorant Americans; of that I am fairly certain. Love might be able to convert the so-called silent majority, and if it can, it can very well defeat Trump and his ilk. In that case, as difficult as it is to express love and compassion in this time of horror and despicability, it is worth doing so. But I think the love must be directed, focused, and strategic, for it is too much to ask that we love those who condone evil. It’s not entirely clear to me that Dr. King would expect us to love Trump supporters in the interest of converting them, or if he would advocate for the philosophy because a general attitude of hate and anger would alienate the silent majority; I’ve no doubt that Malcom X’s attitude did and would alienate them. At the same time, in the face of unrelenting injustice that, despite decades if not centuries of nonviolent resistance, has not abated, who can tell the oppressed that they should not turn to violence to defend themselves?

Ultimately, if our end goal is to defeat Trump and Trumpism, we should embrace whatever tactic will do so with the least suffering in the shortest period of time. For me, this means ensuring that while I consistently and relentlessly speak out against evil, I do so in a manner that mainstream or centrist Americans can embrace and support, for without their support I don’t see how we make any progress. Surely, then, nonviolent civil disobedience is preferable to violence–not necessarily because violence isn’t called for or effective in the short-term, but because it has the greatest chances of saving our Republic from the clutches of fascism. In short, I will seek to balance the imperative to denounce evil with the wisdom of doing so in a manny that others can, if not embrace, respect and support.

How Should We Feel About Trump Supporters, Tactically and Spiritually?

Why I’m in McAllen, Texas

What I Saw in McAllen and Brownsville, Texas

The Poet of Resistance

The Frantic Invisible Night: 2,500 Children Separated from Their Parents at the Border

Dear Donnie, A Letter to the “President”